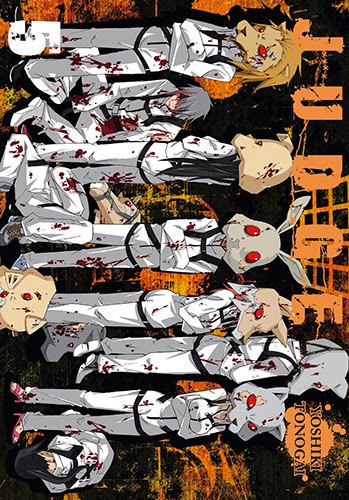 IT'S TIME TO CLEAR THE DOCKET

Who could possibly be responsible for this game? That question swirls among the participants, who grow more desperate as they are forced to make one horrific choice after another. The game is to conclude when the requisite four survivors have been determined. For those fortunates, court will be adjourned... But what awaits them on the other side of the courthouse doors?

"Back then I got angry and said something so cruel... but truthfully I was happy to heard that from you. If I knew things would turn out like this... I would've just done as you asked."

This review is free from spoilers. This is safe to read even if you haven’t read the previous volumes :) BUT TAKE NOTE OF THE BLURB BECAUSE IT SOMETIMES MENTION SPOILERS FROM PREVIOUS VOLUMES.

I had mixed feelings for this volume. The beginning felt a bit forced but it pulled a thrilling psychological warfare among the remaining players later on.

Volume 4 ended in a real cliffhanger. I had questions - a good amount of them - and this volume slowly worked further regarding those questions I had. It's trying to give hints about the things I'd like to know and further things to ponder about in connection to them. But this volume failed to show a better executed pointing of fingers about what happened in the cliffhanger of the last volume. It was very expected and felt forced.

Setting that aside, things were definitely going faster things time around. As I digest the last fight among the remaining survivors, another door opens where things started going from psycho-thriller to survival-thriller (SAW2 style, LOL). Some of them remained passive but some started being aggressive. Panic escalated on Hiro as he digests the new information regarding the survival aspect of the game.

Aside from the thrilling pace this volume took, I also found this the only moving volume. The previous back stories were pretty interesting but not enough to really make me feel for the people involved. It's Miku's back story that only moved me. I felt for her (even though I was never in her shoes) but I'm disappointed at certain aspects of her stories. I think that certain parts of her story are quite far-fetched. They could have been written in another way to make it more believable.

The final volume will be released this month. It's going to be a hide-and-seek kind of thing. There're going to be revelations and tying of all the things. I really can't wait for it!