[REVIEW] They Call Me Alexandra Gastone 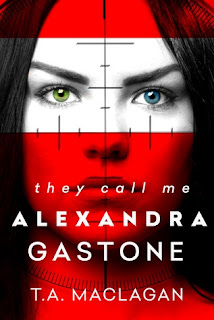 When your life is a lie, how do you know what’s real?

Alexandra Gastone has a simple plan: graduate high school, get into Princeton, work for the CIA, and serve her great nation.

She was told the plan back when her name was Milena Rokva, back before the real Alexandra and her family were killed in a car crash.

Milena was trained to be a sleeper agent by Perun, a clandestine organization from her true homeland of Olissa. There, Milena learned everything she needed to infiltrate the life of CIA analyst Albert Gastone, Alexandra’s grandfather, and the ranks of America’s top intelligence agency.

For seven years, “Alexandra” has been on standby and life’s been good. Grandpa Albert loves her, and her strategically chosen boyfriend, Grant, is amazing.

But things are about to change. Perun no longer needs her at the CIA in five years’ time. They need her active now.

Between her cover as a high school girl—juggling a homecoming dance, history reports, and an increasingly suspicious boyfriend—and her mission in this high-stakes spy game, the boundaries of her two lives are beginning to blur.

Will she stay true to the country she barely remembers, or has her loyalty shattered along with her identity?

I've never read a book about spying, espionage. I've always been interested in the idea so when I came across They Call Me Alexandra Gastone, I knew I should pick this up.

Milena is a spy from Perun, an organization from her homeland Olissa, who takes the place of a girl named Alexandra Gastone, the granddaughter of a CIA analyst Albert Gastone. Milena's on standby, that is until Perun's plans change. She received new orders telling her to frame Albert.

They Call Me Alexandra Gastone is really intriguing to its core. Although I have to admit that during the first half of the novel - that is before Milena (currently taking the role of Alexandra) - I was kind of bored. During the first half, there was a tedious explanation of Milena's relationship with the people around her, the things that were done to her before she was sent on a mission to Albert's, and a few more things to establish Milena as Alexandra.

Milena was strongly established. I also like her relationship with Albert. It made her stronger than before. It allowed her to think critically, consider every possibility, and question everything. Milena really grew as a person throughout her stay with Albert and I love how she grew soft with him.

Pass the second half of the novel, my interest escalated. Everything suddenly became more intriguing and more engaging. Since the first half was somehow devoted to establishing Milena as well as the entire setting, the second half had all the interesting matters. There were unexpected twists and revelations. One of which, I already see coming and others were just surprising - surprising not in a out-of-nowhere kind of way, but the idea just didn't cross my mind.

OVERALL, They Call Me Alexandra Gastone is an intriguing secret agent/spy novel. It's got a great, well-established heroine and involves a great amount of twists. It gives off a hint of romance and I'm so glad to report that it's not all over the novel. They Call Me Alexandra Gastone is a recommended read for those who enjoy spy novels with a good amount of twists :)

What I Like: (1) Milena Rokva - how established she is and how she was developed, (2) Milena's relationship with Albert, (3) Albert Gastone - just because he's should be my grandfather, lol, (4) the secondary characters - I liked Milena's (Alexandra's) best friend as well as her curious boyfriend, (5) the engaging and thrilling climax, (6) the twists! oh so much twists!

What I Didn’t Like: (1) the unmemorable character names, lol. okay, so I vaguely remember them but I don't remember their names which sucks, (2) the slow establishment of everything - I was honestly a bit bored in the beginning but the second half really makes up for that