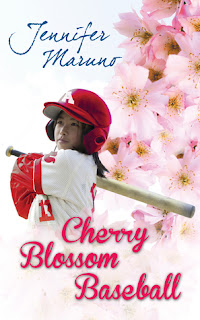 Is pretending to be someone else the only way Michiko can fit in?

Michiko Minigawa’s life is nothing but a bad game of baseball. The Canadian government swung the bat once, knocking her family away from a Vancouver home base to an old farmhouse in the Kootenay Mountains. But when they move into town, the government swings the bat again, announcing that all Japanese must now move west of the Rockies or else go to Japan.

Now in Ontario, Michiko once again has to adjust to a whole new kind of life. She is the only Japanese student in her school, and making friends is harder than it was before. When Michiko surprises an older student with her baseball skills and he encourages her to try out for the local team, she gives it a shot. But everyone thinks this new baseball star is a boy. Michiko has to make a decision: quit playing ball (and being harassed), or pitch like she’s never pitched before.

"But we need to put all these things behind us now," he said. "We can spend the rest of our lives blaming the war, the government, the camp, the prime minister. Instead of complaining, we should work hard to make things better." -loc873; eARC


Cherry Blossom Baseball is a book that really delivers. It started a bit slow as it lays everything up. The setting immediately tells you that it happens during the world war. Maruno really brings you into that time period by name dropping Emperor Hirohito. I think that there's a decent amount of research done for this as the situation of Japanese during those times in Canada were explored.

I really like the use of several Japanese words. Many of which are familiar to me while some were explained or can easily be understood. If not, a short description is placed at the end of the book which is really helpful for those who are not fond or familiar with the language.

I expected this book to be a young adult one, but it turns out to be a middle grade book. It's still fine for me. It really gives off a really wholesome transition for Michiko from one school to another. Her adjustment to things like using English and Japanese names and going around her classmates is really interesting. You can really see the difficulty in her adjustment as well as her fears and worry.


I have to admit that I'm not that familiar with baseball but that's not really a problem. While it is one of the driving force of the novel, you don't need to have so much knowledge on the matter just the basics, really. When Michiko joined the baseball team as a girl without informing the coach, things started finally getting more interesting. That was around 50% of the novel.

I thought that throughout the baseball side of the story, Cherry Blossom Baseball has that dash of inspirational spark on the story. I like it but it's not very moving. The bullying Michiko takes isn't very hard hitting. In fact, it's not really a big deal since she's not really being completely affected by it. It's that strong side of her that keeps on fighting and thinking that she's always on the right that wins. It's a really positive story.

OVERALL, Cherry Blossom Baseball is a good coming of age story. Michiko is a strong heroine with lots of fight in her. The novel also has a well established setting which would absorb you if you're into the time period. It's a WWII set up but not something that involves wars although there's a hint of it. It's focusing more on the struggles of Japanese people on a foreign country. It's not a highly recommended novel but would be a good read if you're interested in the setting :)

What I Like: (1) the setting - how it well laid down, (2) the baseball - not that I'm a huge fan, haha, (3) the bits of Japanese culture and words placed inside the novel, (4) Michiko's strength - her positive attitude

What I Didn’t Like: (1) I was not move by the story - I know it wants to move me but it just didn't work. I felt that it wants to be inspirational or something  but I just didn't feel that way for Michiko or to the story in general