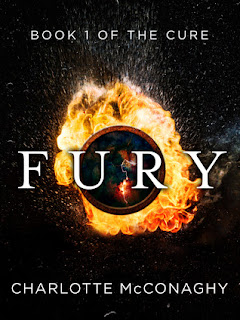 When emotions are erased from the world, creating a civilization of mindless drones, only those with fury can survive.

On the same day each year Josephine Luquet wakes naked, shivering and covered in blood that is not her own. Under the cold gaze of the blood moon she is someone else entirely, but when dawn breaks her memories vanish and she is left with only an icy horror, a burning fury. Amid a sea of 'drones', she alone hasn’t been cured.

Then she meets Luke. He isn’t like the other drones. With secrets behind his eyes, he is the only one determined to help Josephine discover the truth before the next blood moon rises.

But time is running out. Is Luke willing to risk his life to be near her? Does he truly understand what violence she is capable of?

Raw and full of passion, Fury is a story of love in a dystopian world, and how much we are willing to forgive in the struggle to remember our humanity.


I like it when a futuristic science fiction gives a realistic vibes - that moment when you realize that it can actually be possible. This is one of the things I love about Fury. It creates a story that may seem completely far-fetched yet explanations made later on make it all seems realistic.

I've lived every moment of my life within the full spectrum of human emotion, and he's right - it is exhausting. But I can't imagine ever being tired enough of life to want to cut half of it away. -loc86


Fury has a really interesting premise that completely hooked me. I like the idea of erasing the world of 'anger' in order to prevent chaos. It makes sense. It's a good move intention-wise but looking through what it really does, getting rid of an emotion is like getting rid of an important part of a person. And that makes the story more interesting.

Josi went through a tough childhood. She was pass on from foster family to another yet it baffles me that there was no mention of her biological parents or any attempt to uncover them. It may deem pointless but I'd love to see that or at least a mention of her not being interested at knowing them at all. If it was mentioned at all, I might have missed it. I suck. Sorry.

Fury started quite slow for me. Almost 40% of the book is dedicated to introducing Josi and her relationship with Luke. There were so much talking, descriptions, and setting every single thing that happened around two years ago. If you like these kinds of things, I'd say that you'll fare with Fury. Its picks up pace after that as a lot more things were revealed. It's my kind of thing. I love things fast and thrilling. It had me reading all night to see how things will go - how will they find the cure for Josi, how the events told in several time frame will meet.

If I don't want to spend my life as a half person, unfinished, then I must find a way to shed my past from my skin and be more than it. -loc1953


Admittedly, I'm not a big fan of the romance. I mean sure there was a slow and decent development between the two of them yet there is still a trace of insta-love. The good thing though is that they didn't jump right into each other. There was hesitation and fear. They both had things holding them back from really committing to each other. SO it ended up more like an 'okay' thing for me.

Anthony was like a wild card. I didn't know what to make of him. I didn't immediately knew what he's real point in the story is. Yet as the story progress, I understand that Anthony. I understand why he's there, not only to help Josi, but also to show the side of the drones. And I like how it was strongly shown in the climax.

The storytelling and sequencing is one of the strongest point of Fury for me. I like how it was told in a non-linear way. I kept on paying attention on the dates before each POV. At first, I was confused but that lasted for about two or three POV and time frame changes. It was really easy to get around it. I like how everything was slowly unraveled through the changing POVs. I also get to see which facts Josi knows and which ones Luke has kept from her.

We forget, don't we? We all forget. Amid Furies and Bloods and cures and drones, we all forget how beautiful life is, how hard we must fight to keep it. [...] how we've been focused on all the wrong things, how we've thought only of the curse but not the blessings we have lived. -loc4007


The ending had a cliffhanger feel but still greatly satisfying. It ended up the first book well and built a good start for the second one. Enough to make you look forward to it. And that's exactly what I'm going to now - pick up the next book and see how the resistance will go (rebellion and resistance group is always around the corner when it comes to dystopian novels, why am I not surprise?).

OVERALL, Fury is science fiction with a very interesting premise that I think seem a bit realistic. McConaghy made me believe that it can be possible. I applause her such great explanation. Fury is such a strong dystopian novel with a great heroine who you'll follow until the end - I wanted to see Josi cured, I want her to savor life and enjoy it. It had a great sequencing that kept me reading and never confusing even for a bit. The multiple POVs (three) told the story well and even though it made me aware of things - it kept me reading because I like to see how Josi will face the revelations or how Luke will handle things. All in all, it's a great read that I highly recommend for dystopian novel readers!

What I Like: (1) the premise - the cure, removing anger, the Bloods, drones, and Furies, (2) Josi - strong heroine despite everything, (3) the multiple POV (confused me at times - can't always determine who's talking) - told the story well, (4) the sequencing - non-linear and I like it as it is. The slow unraveling of things and the back and forth of the time frame, (5) the climax - had me at the edge of my seat, (6) the satisfying ending - satisfying and made me look forward to reading the next book

What I Didn’t Like: (1) the first half that focused on building the world and Josi and her relationship with Luke, (2) how I wasn't fully engaged to Luke and Josi's relationship - strongly on my side though, really.