[REVIEW] My Heart and Other Black Holes 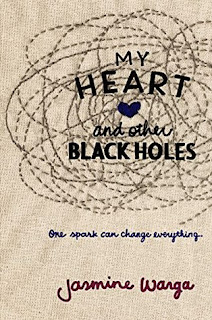 Sixteen-year-old physics nerd Aysel is obsessed with plotting her own death. With a mother who can barely look at her without wincing, classmates who whisper behind her back, and a father whose violent crime rocked her small town, Aysel is ready to turn her potential energy into nothingness.

There's only one problem: she's not sure she has the courage to do it alone. But once she discovers a website with a selection called Suicide Partners, Aysel's convinced she's found her solution - Roman, a teenage boy who's haunted by a family tragedy, is looking for a partner.

Even though Aysel and Roman have nothing in common, they slowly start to fill in each other's broken lives. But as their suicide pact becomes more concrete, Aysel begins to question whether she really wants to go through with it. Ultimately, she must choose between wanting to die or trying to convince Roman to live so they can discover the potential of their energy together.

This is a gorgeously written and compulsively readable novel about the transformative power of love, heralding the arrival of an extraordinary new voice in teen fiction, Jasmine Warga.

It's kind of crazy that all of a sudden novels about suicide and depression started becoming the topic of YA novels (I could be exaggerating though). Despite the popularity of the topic, I'm still attracted to it.

Depression is like a heaviness that you can't ever escape. It crushes down on you, making even the smallest things like tying your shoes or chewing on toast seem like a twenty-mile hike uphill. Depression is a part of you; it's in your bones and your blood. If I know anything about it, this is what I know: It's impossible to escape. -p14


Aysel thinks that she lives a doomed life because of what her father did. She fears that in some ways, she might be like her father. She think she's better off dead. She looked for a suicide partner because she's too scared to do it alone. Roman is guilty of his sister's death. He blames himself and thinks his parents are being too considerate for him. He thinks he's better off dead. Aysel and Roman met through an online forum and became 'suicide partners.'

Yes, suicide partners. The idea definitely what caught my interest. At first I was really excited about the idea. But months after I bought the book and deciding to finally read it, I was really questioning the idea. I mean, seriously? If you can't do it alone, why don't you just NOT do it? Anyway, that's not really the issue for me but I just want to get that out of me. Let me just set that whole idea aside...

As I read through My Heart and Other Black Holes, I wasn't really feeling anything for both Aysel and Roman. While I do see where their problem is coming from and even though how hard I try to really consider their mindset, it's just not working for me. Let's talk about Aysel.

I don't tell Roman that  my dad not only ruined my life because of what he did, but also because he made me scared of what I am, what I'm made of. -p151


While I do understand Aysel and I'd like to see how she lived her life after her father's crime, I just can't fully get there. Aysel's home life doesn't seem bad as she makes it sound. Her mother sounds really normal to me. She doesn't really sound like someone who don't like her there. Her, half sister, on the other hand, doesn't sound so bad as well. All throughout the book, it really felt like it was Aysel who's creating the distance from her family.

Aysel's development was really good though. Right at the beginning I kind of did not like her because as I said, I don't see anything wrong with her home life (and school life). While I still don't see anything bad going on with her aside from how close her mind is, I find her development to be really smooth. I like how she slowly finds a reason to live and how she had the mindset of also convincing Roman to live.

My Heart and Other Black Holes had a really predictable story. I knew where things were going right from the beginning. Perhaps that's the reason why I barely care about the characters.

OVERALL, My Heart and Other Black Holes is a wonderful novel about finding a reason to live. This is more of an 'okay' read for me. I liked Aysel and Roman but I did not completely feel for them yet I do love the ending. My Heart and Other Black Holes is an uplifting read. It's certainly recommended for those who enjoys novels about suicide, depression, and finding reasons to live.

What I Like: (1) its uplifting nature - definitely the reason why I read suicide novels, (2) Aysel's development, (3)  the people around Aysel - including Roman of course!, they were secretly there for her all this time

What I Didn’t Like: (1) the lack of actual scenes where Aysel's life is miserable or bad (because really, I just don't see it), (2) I didn't feel for both Aysel and Roman