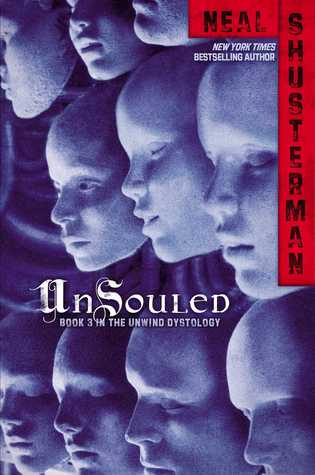 Connor and Lev are on the run after the destruction of the Graveyard, the last safe haven for AWOL Unwinds. But for the first time, they're not just running away from something. This time, they're running toward answers, in the form of a woman whom Proactive Citizenry has tried to erase from history itself. If they can find her, and learn why the shadowy figures behind unwinding are so afraid of her, they may discover the key to bringing down unwinding forever.

Cam, the rewound boy, is plotting to take down the organization that created him. Because he knows that if he can bring Proactive Citizenry to its knees, it will show Risa how he truly feels about her. And without Risa, Cam is having trouble remembering what it feels like to be himan.

With the Juvenile Authority and vindictive parts pirate on the hunt, their paths will converge explosively - and everyone will be changed.


If I'd have to pick a book I like the least in the Unwind series, it would be this. I enjoyed it and found it quite thrilling but it just isn't the same. It's not as thrilling. It's not as exciting. It's still greatly thought provoking though.

UnSouled started with where UnWholly ended. It began with Connor and Lev. It about their journey to find Sonia - to find a way to stop unwinding. That's the backbone of the story. Unfortunately, Connor and Lev (and even Risa) had so many detours, I didn't know whether to like it or not. A part of me enjoyed the many struggles - the adventures - and the connections made to previous books (especially to Unwind). Another part me thought that everything that went on here dragged the story.

Let me get to that. Instead of going straight to Sonia, Connor and Lev had to meet unfortunate events and people, Risa had to go through a wild and crazy adventure and meet new people. There are, of course, development on the characters but not as strong as the previous books. This really felt more like a further show-off of what unwinding has done to the US - the ChanceFolks, the clappers, the Tyler-people (forgot, what they were exactly called).

The story mostly moved through Connor. Lev's and Risa's POVs were certainly present but Lev had that internal conflict going on which eventually led to his final decision which I'd like to further see in UnDivided. Risa's POV, on the other hand, felt really flat. She's there but she barely move the story. And I really hate to say this but her POV bored the hell out of me. Admittedly, I like how her view actually showed that at the end of the day, they're just young adults trying to survive.

Connor's side of the story is purposeful. Perhaps, of all the kids in line or was lined for unwinding, Connor is the most determined not only to survive but to end it. His development from the first book to the second to his strong determination in the third book is one of my favorite things in the Unwind Dystology. Connor will forever be my fave character in the series.

A large amount of the novel was told through the points of view of secondary characters though. In a way, the story moves through places that's really interesting, intriguing but never thrilling. Unfortunately, UnSouled was never thrilling to begin with. The introduction of Argent and Grace will obvious play an important role in UnDivided. I like how Shusterman built their characters though - they will really stir the characters up in the next book.

Unsouled really felt like a middle book and perhaps, in some ways, it did suffer that middle book syndrome. As I mentioned, the story moved mostly in Connor and not much character development happened, in my opinion. Since this book focused on finding the solution to unwinding - it dumped things that would further make unwinding a greater problem to deal with (in the name of Proactive Citizenry - their actions, their plans), and things that could stop unwinding (the Rheinschilds').

The strongest point of UnSouled are the further questions thrown to the readers. Despite the setbacks I encountered, it still remains as a highly thought provoking read - the question of Cam's existence, the real intention of Proactive Citizenry, the world that revolves around money and good business.

OVERALL, UnSouled is a book that prepares the readers for the final installment of the series, UnDivided. It had some good and bad points. It was intriguing, thought provoking, and enjoyable to read but is never in par with the previous books. It felt a bit dragging but part amusing as well. Certainly not the best in the series but perfectly paves the way for the final book.

What I Like: (1) the interesting developments on the story, (2) the further building up of the world - the disunification disorder, the ChanceFolks, (3) how thought provoking it is, (4) the intention and movements of Proactive Citizenry, (5) the clappers, Starkey, and Hayden - this side of the story was certainly interesting, (6) Argent and Grace (especially Grace!!)

What I Didn’t Like: (1) how dragging it seemed, (2) Risa's POV was honestly not that important, unfortunately, (3) it's not as thrilling as the first two