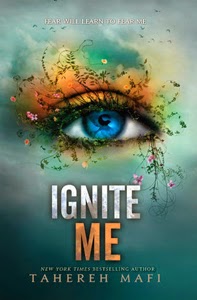 THE FATE OF OMEGA POINT IS UNKNOWN.

Everyone Juliette has ever cared about could be dead. Juliette may be the only one standing in The Reestablishment’s way. But to take them down, Juliette will need the help of the one person she never thought she could trust: Warner. And as they work together to defeat their mutual enemy, Juliette will discover that everything she thought she knew – about Warner, her abilities, and even Adam – was wrong.

Words, I think, are such unpredictable creatures. No gun, no sword, no army or king will ever be more powerful than a sentence. Swords may cut and kill, but words will stab and stay, burying themselves in our bones to becomes corpses we carry into the future, all the time digging and failing to rip their skeletons from our flesh.

[All spoilers are in white font color (there are hints if a text is hidden such us space gaps, parenthesis, or colons). Highlight the white texts to read the spoilers if you want to or if you’ve already read this book or its prequels Shatter Me and Unravel Me]

Ignite Me ended the Shatter Me series decently. It was nice but not really something that I’ll remember for a good amount of time but I do have to admit that I really enjoyed it.

Ignite Me started out slow for me. It picked up directly from where Unravel Me left with the first few chapters focusing on Juliette and Warner. I really do like this Juliette x Warner thing. Honestly. The first chapters of Ignite Me focused so much on the relationship between Juliette and Warner specifically making it seem like Warner is a forgivable person.

While reading these first few chapters, I keep on rolling my eyes while telling myself: Seriously? All these things Warner is telling Juliette sounds like a HUGE excuse to her so that she’ll have a reason to forget all the shit things he did. Clearing Warner’s name was quite forced. Mafi could have kept the badass Warner and just pushed him into something more life changing so that he’ll have a change of heart or something. But yeah, that’s just me complaining…

One of the things I really love in here is all the heart-to-heart talk between Juliette and Kenji. It’s not only because I LOVE Kenji (and how I am reminded of myself on how he talks) but it’s also because I LOVE this relationship between Kenji and Juliette. I love all these support coming from Kenji, how Juliette always wanted to have Kenji on board with her, and how she wants Kenji to be the one sharing. Their relationship is the BEST in this series. For me they’re not just best friends, they’re more like siblings, brothers and sisters who always lean on each other.

I have always been in love with Juliette (yup, since Shatter Me). I LOVE how Juliette developed into this strong willed character as the series concluded. Unravel Me had those moments when Kenji just points out what’s wrong with her. Ignite Me, on the other hand, had those moments when Juliette finally and really accepted her ability, fully acknowledge her feelings towards Adam and Warner, learned how to say what she’s truly feeling, and other more things.

I mentioned in my previous reviews that I’m not fond of Adam. Now this book really just made me HATE him even more. I honestly did get entertained with all his drama and shit. But really, there has to be an end to being a dickhead and Adam is just… I don’t know… the closure of his relationship with Juliette was a bit… disappointing. Anyway, let me tell you what I think about Adam as I read through Ignite Me. Adam is such a low, clingy, prideful, and close-minded shit! (really, I wrote that while I was reading this~~) I don’t exactly see why he’s so into protecting someone aside from the fact that it naturally comes out from a guy. But seriously not wanting to accept the emotionally strong Juliette is just shit.

Ignite Me focused so much on the romance aspect of the story. It’s like 75% romance, 15% friendship, and 10% rebellion. While I do like the romance, it just ate so much of this final book. It’s as if it’s saying that the Shatter Me series is actually about Juliette’s love life with this dystopian and post-apocalyptic world as something merely to move the story forward.

Another thing I noticed in Ignite Me is how Shatter Me’s unique writing style was completely set aside. Mafi’s writing style in Shatter Me was what pulled me before and it disappoints me to see it gone. It’s just plain story telling. All the strikethroughs, the prose, the odd metaphors, etc. were gone. Oh well…

As a series-ender, I think Ignite Me was able to present a nice conclusion. I really like how it wasn’t like the-whole-world-is-finally-saved kind of thing. It’s more of like we’re-done-with-our-problem-time-to-help-others… Well that’s a really stupid way to put it. I guess all I’m saying is that I like how it wraps up everything in such a way that it just solved the matter in hand not every little shit out there in their world.

What I Like: (1) Juliette and Kenji’s relationship, (2) the way Kenji talks and pulls out jokes, (3) KENJI!, (4) Adam’s entertaining tantrums, (5) the development of Juliette’s character, (6) the conclusion – the final chapter, the descriptions

What I Didn’t Like: (1) the slooooow beginning, (2) the forceful developments, (3) ADAM, (4) ADAM, (5) and did I alread said ADAM?, (6) the beautiful writing I enjoyed in Shatter Me being completely taken away, (7) the climax – the action, the battle