[REVIEW] Prophecy of the Most Beautiful 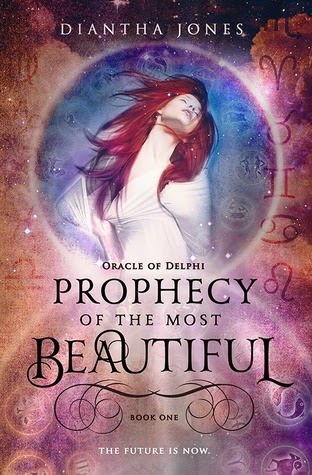 She has a destiny so great that even the gods fear her.

Constant hallucinations and the frequent conversations with the voices in her head, have earned eighteen-year-old Chloe Clever the not-so-coveted title of "Whack Job" in her home town of Adel, Georgia. Fed up with prescription meds and therapists, she wishes for a life where she is destined to be more than the butt of everyone's jokes and mockery.

Be careful what you wish for has never rung more true.

After a vicious attack and learning that her favorite rockstar is an Olympian god, she is thrust into her new life as the Oracle of Delphi, the prophesier of the future. Setting out to fulfill the prophecy she has been given, Chloe learns of how great she is to become, all the while fighting mythical monsters and trying to outwit the ever-cunning Greek gods who harbor secrets of their own. While on a mission to discover the Most Beautiful, she strives to uncover the mysteries of the demigod Prince who has sworn to protect her with his life…and threatens to win her heart in the process.

Prophecy of the Most Beautiful is my first YA mythology read (and the reason I wanted to read it was because I’ve never tried mythology before). Greek Mythology, in particular, is very interesting and I thought that reading something about the Oracle of Delphi will be a nice start for me for the genre. Guess not.

It was a really bad start for me. There’s Chloe Clever returning to school from a suspension because she failed to keep her strength at bay. She ‘hallucinates’ a lot which always end up to her beating the freak out of people. Prophecy of the Most Beautiful starts with an urban fantasy setup. I don’t think it was Chloe’s fault but the beginning just set my mind up that I won’t be fond of this story. There were things that go on that I don’t really care about (and for some reasons that included Chloe herself). Chloe tried to have this dramatic life of being considered a delinquent but I just didn’t felt for her. Then she started heading into a classy life style with huge wardrobes, meeting rockstars, and having a Princess Diaries makeover. Oddly enough, she just accepted everything. And I was like: WHY? But let’s skip explanations because she just did because she thought she doesn’t have a freaking choice (poor Chloe never having a choice of her own). Then she jumps to the fantasy world taking in everything and going on a crazy adventure who knows why she should do it (okay the god Apollo knows why but Chloe doesn’t exactly know she just thought she should do it)…

The adventure part of the story is actually a pretty fun ride. It reminded me of the Odyssey wherein Chloe and her party (this is an RPG people! LOL) travel around fighting demigods that stop them, go to places only magic can bring them (or maybe even a grouchy demigod of some sort), and a few more things that you’ll see in a grand mythological adventure. It’s heavily based on mythological stories but is very much sprinkled with some modern imagery (who would have thought that Dionysus would have a demigod kid who’d own a freaking bar high up in the sky?). There were fighting, of course. Many battle scenes in fact. The problem with this was that they were, at times, confusing especially during the first battle.

Another problem I had with this is how Chloe’s journey is completely being controlled by Diantha Jones via Strafford Law. The story moves with Chloe asking where are we going now? Why are we here? Why are we doing this? blah-blah-blah. She doesn’t control anything. She holds nothing. She just follows. Follow the back of Strafford Law as set by Jones. She gets Oracle visions only to decipher them at the end of the story NOT during her journey. The Oracles don’t guide her to where she should go or what she should do next.

Prophecy of the Most Beautiful actually allowed me to master the art of skipping a block of words even paragraphs without missing out on the story. Seriously. There was a lot of imagery in here. Some of which a pretty nice and some where just meh – I’d like to skip them already because I completely don’t care about them. There was so much talk on outfits and I can’t even comprehend the importance of it especially at the beginning. But as the book goes on, they get lesser and we get the better part of the imageries – the descriptions of the places, the details of Ancient Greek buildings, the feel of their adventure, etc.

It has multiple POV wrapped in a third-person story telling. In a general opinion, I think it was written pretty much okay. There’s distinction between voices. The problem was the inconsistency of the POV shifting. For me, it’s as if there’s POV shifting for the convenience of the author. The main writing platform is Chloe; Strafford’s POV shows his romance part of the story because Jones can’t write it well in Chloe’s POV; there’s also a few more POVs mentioned two or three times just to show other parts of the story she can’t afford to write in Chloe’s POV alone.

The romance was more or less okay. I like how it’s not all over the book – how it’s not eating every single page and chapter. My issue about the romance is how it was set aside (not completely but it just pops up every now and then). I know it kind of sounds like I’m contradicting myself but all I’m asking is balance. There should be a gradual development in the romance. They shouldn’t just appear when the author feels like writing about them. And did I mention that it’s insta-love? I was thinking of letting it slide but I guess it’s just right to mention it :)

The climax was downright bad. The adventure was okay, as I mentioned earlier, but they just go mission hopping, nothing resolved along the way – meaning? EVERYTHING was dumped tried to be resolved or tried to be given a proper closure or whatever it is they are trying to do at the end. It’s not a good thing especially at how it was done because Chloe didn’t actually solve anything at all. She just let things be and when everything’s done she was like: oh… so that’s what the prophecy meant. I was like: seriously? x__x THEN they further talk about the details of the prophecy blah-blah-blah. In simpler words, Chloe’s prophecy meant nothing. It was completely pointless because she didn’t exactly make use of it.

What I Like: (1) the fancy adventure, (2) the Greek Mythology stuff such as hierarchy, demigods, etc., (3) the distinction of voices in the POV, (4) Chloe’s brother


What I Didn’t Like: (1) the beginning and the climax, (2) Chloe’s inability to really utilize her ability, (3) the inconsistency in POV shifting, (4) the lack of character development (we merely know fact about them), (5) the lack of proper closure on some things, (6) the freaking climax which crammed up every explanation possible for Chloe’s prophecy