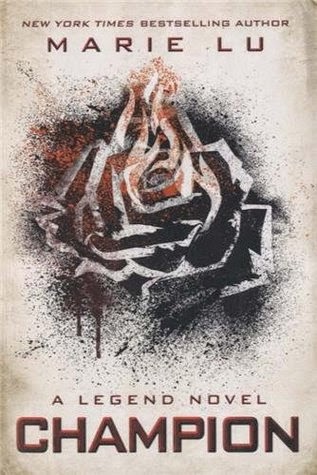 He is a Legend.

She is a Prodigy.

Who will be Champion?

June and Day have sacrificed so much for the people of the Republic—and each other—and now their country is on the brink of a new existence. June is back in the good graces of the Republic, working within the government’s elite circles as Princeps-Elect, while Day has been assigned a high-level military position.

But neither could have predicted the circumstances that will reunite them: just when a peace treaty is imminent, a plague outbreak causes panic in the Colonies, and war threatens the Republic’s border cities. This new strain of plague is deadlier than ever, and June is the only one who knows the key to her country’s defense. But saving the lives of thousands will mean asking the one she loves to give up everything.

No matter what happens in the future, no matter where our paths take us, this moment will be ours.

THAT ENDING WAS SO WONDERFUL. I DON’T THINK THERE’S A BETTER WAY OF CONCLUDING THIS REALLY GREAT TRILOGY. I can even call the Legend Trilogy right now as a dystopian-romance series done right.

I think it all makes perfect sense since Legend practically did all the introductions and Prodigy, on the other hand, did all the development. It’s as if everything that went on in the entire series were well thought of.

Unlike Prodigy, for me, Champion focuses on developing that really beautiful and emotional conclusion. All the hints were there and I’ve seen it all coming yet I really just can’t stop myself from tearing up especially almost about everything towards the ending.

Champion starts off a few months after the Republic and the Colonies formed a peace treaty (They’ve finally come in good terms, wee~) yet for the story to continue, this must be broken (and thus Mobile Suit Gundam SEED Destiny immediately entered my mind). At first I was sadden by this development but in the long run, it all makes perfect sense which made me change my view on this beginning.

It had a slow start for me. There were lots of Day and June thoughts (especially Day) about how they parted off in Prodigy, the plague problem in the Colonies, the Republic’s need for Eden, and Thomas’ confession. For some reasons, I can’t exactly pinpoint why I find everything so slow (or it must be the lack of action which I am expecting from this book) but I do believe that the first pages of Champion shows what will practically go on as the story progress.

Champion is filled with so much emotions especially of Day (with all the I’m-dying-what-do-I-do and I-don’t-want-leave-Eden-alone dilemma). What I particularly like about Day’s part in here is how much of a family oriented guy he is. It’s not only about Eden but there’re also John, and his mother. Eden being Day’s only family left roused so much conflict in the story that it became something repeated over and over in so many pages (and maybe that’s something I didn’t like a bit in here. I was like: I KNOW! Can we move on to something else right now? Okay, maybe that was a pretty bad rant).

Setting aside the love for Eden, there was a lot of heart shattering moments at the latter part of the book particularly between Day and June. The peak for me in here was when Day was shot ( I was even quite busy when I was reading that part and I had to put it down for a couple of minutes, do something else, continue reading, then put it down for a while again, etc. you get the point). I kind of find it amazing how even though I was busy, every time I pick it up all over again, the feeling is still there. I was teary eyes when I put it down and had teary eyes again once I pick it up (totally weird! Haha~).


Thomas only shakes his head. “It’s the duty of a Republic soldier to be loyal to the end, and I’m still a soldier. I will be one until I die.”


Champion has so much love for secondary characters (like Prodigy!). I kind of have this love-hate relationship with Thomas and his confession in here (and eventually his death) made me love him at the end. I know that there isn’t so much to explore about Thomas but his relationship with Metias totally just made me cringe. Then there’s Anden. He has this internal conflict for being shadowed by his father’s name and deeds. Anden’s character was developed well throughout this book as he June tries to help really help him step out of his father’s shadow. There was also Pascao and Eden who were given enough time for us to fully appreciate their characters. Pascao’s character really shine here in Champion, in my opinion, because not only did he save Day’s butt a couple of times, we also get to see more of Pascao’s reason in fighting for the Republic.


I mentioned earlier that this trilogy seem to be well thought of. I really like how this final installment flawlessly connected itself to both Legend and Prodigy. How everything about Day’s emotions go back to everything that happened in Legend and how the solution to the plague looks back to June’s condition in Prodigy.

What I like: (1) so many beautiful quotes I really wish I can share them all (but I will find a way to do that~), (2) there was so much love for secondary characters, (3) every page is full of important things, (4) so much emotions – so much tears shed for both sadness and joyful moments, (5) THAT HAPPILY EVER AFTER EPILOGUE!, (6) Antarctica is so amazing @_@, (7) Eden is so mature!, (8) really perfect ending

What I didn’t like: (1) I guess so much of the same issue drags the story for me, (2) it started off quite slow for me (around first 2 or 3 chapters, I think)