Looks like Bakuman just turn from lives of a partner mangaka to the life of a seiyuu. Am I interested? I'm a huge fan of seiyuus, but no, I'm not interested.


Microphone of Dreams.
I remember that at the beginning of Bakuman, it was Ashirogi who's getting an extremely hard time in creating a manga for Miho to star in. When Miho was getting good roles in different shows, Mashiro and Takagi publishes a oneshot that didn't even got 1st. How painful is that? Well not as painful if Miho don't get this role, that's for sure. 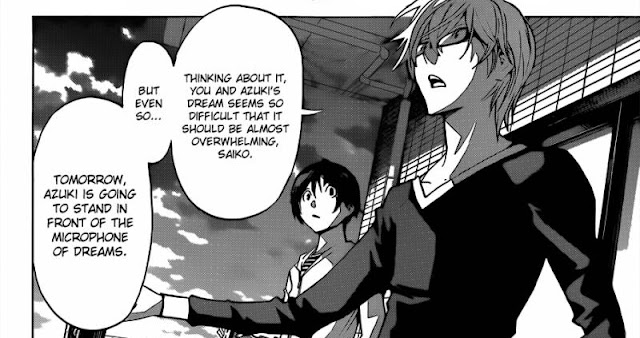 When they were in junior high, their promise were all so sudden, it really is amazing that such kind of dream is being aimed at for so long. Takagi was like, "Manga… Voice Actress… Just how many people have fallen while walking that road and given up?" Well you tell me, Takagi. Actually thinking about just how many people have given up, it really is amazing how Miho and Mashiro are aiming for a dream that includes both.

Azuki sure have some competition.
AND I seriously thought that Miho will be up against Ririka but it looks like she'll be having some better competition. This calls for an amazing seiyuu match. I somehow feel that her strongest rival has got to be this 'friend' of hers, Natara-san. Remember what they say. Keep you friends close and your enemy closer. Natara-san could most likely be up to something. 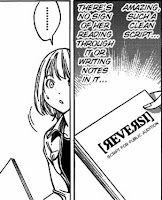 AND she didn't even read the script.
Keep in mind that what's written on the manga can be different from the one that'll be on the anime. I guess Miho missed that part. BUT who cares? I wonder how she'll go. I'm pretty sure they'll all go, "she's good", "she definitely fits the role", blah-blah. BUT Ashirogi and Kaya will still worry so much about Miho's current status because she's up against 2 veteran and popular V.A..

Now how long will this arc go? I'm pretty sure that if all they'll do is worry about Miho and talk over and over about their dreams being freaking amazing, Bakuman will get boring eventually. We seriously need some Niizuma scenes right now!!!
Posted by czai at 3/23/2012