Believe me when I say short haired girls are really cute! :3


Raku x Tsugumi.
Yeah, Tsugumi really is cute. The moment she woke up last chapter right in front of Raku all soaked and shocked has made her a lot cuter than Onodera (who's been missing since Tsugumi appeared). Better yet, it looks like her looks has caught Raku's attention but further development on their relationship won't be happening. Too sad to know.
It's kind of funny to see Raku trying to keep his mind on Onodera while Tsugumi is right in front of him. Moreover Raku openly declared that she's cute right in front of her. AND for some reasons, Tsugumi probably likes the idea as well but her mind is trying its best to reject the idea because like what she said, she has thrown away her womanhood to protect Chitoge. 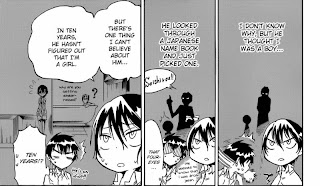 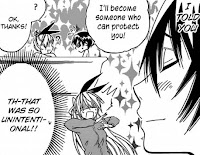 Tsugumi's and Chitoge's Promise 10yrs ago.
For one moment, I actually got a little confuse when Tsugumi said something about making a promise to Chitoge but this chapter did confirm that Tsugumi did promised Chitoge but Chitoge didn't gave any promises back to her. Anyway, what's interesting is that at the end of the chapter, Tsugumi mentioned something about Chitoge making a promise to her first love. Hmmm… Who could that be? 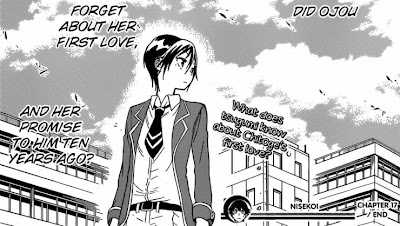