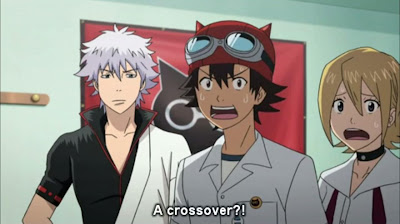 After half a year, SKET Dance is finally entering its third season of airing. Together with Gintama’, the crossover from the manga is made into anime. 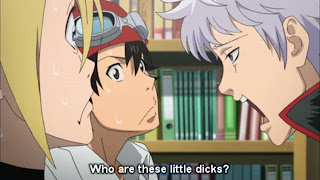 “Sitting on the sofa or tatami and gabbing is a standard SKET Dance scene.” This is what Bossun said about SKET Dance. As for Kagura and Gintoki, SKET Dance is ‘poor man’s yorozuya (that’s pretty odd to hear from someone who barely pay their rent). Anyway, as SKET Dance’s first episode for the Fall season, nothing pretty much change. After the heart breaking arc last week, it’s pretty good to watch something really funny and probably could cater both SKET Dance and Gintama fans (or not?).

To make a short recap, the Gintama main characters (Gintoki, Kagura and Shinpachi) suddenly appear in the Sket-dan’s clubroom because of Old Gengai’s dimensional transporter (Gintoki and the rest serves as test subjects for this new invention, or guinea pigs perhaps? – now this is what you call a really odd job.). As Switch fixes the transporter, Bossun and Himeko deals with the Gintama characters. Bossun does his best to control the Gintama characters in their show and have this feeling that the Gintama might actually takeover their show, SKET Dance. Minutes later, Switch finished fixing the transporter. The sket-dan and the Gintama exchanged farewells. As Gintoki gives off his speech, Bossun concluded that this marks the end of the crossover (or maybe not?). After hitting the button in the transporter which should bring the Gintama to their respective show, the sket-dan along with Gintoki, find themselves in the first episode of SKET Dance. With Switch’s idea of making the machine consumer-friendly, he also added time travel function. With this, both Shinpachi and Kagura were ‘thrown off’ along the way. The four of them searched for Kagura and Shinpachi on other episodes of SKET Dance. After the long (only took more or less 5 minutes) search for the two, the Gintama finally went back to their show. 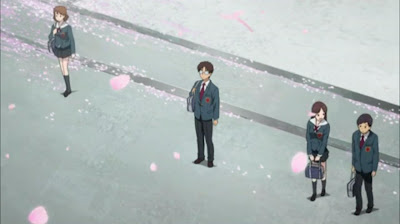 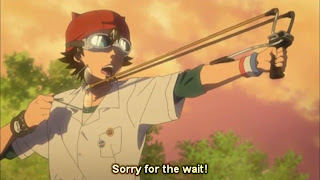 SKET Dance’s version of the crossover is fairly interesting. I've read the manga version before and I have to say that the anime made some adjustments and still able to pull off a pretty good episode. Comparing this crossover to the one Gintama' did, somehow this is below Gintama'. Most of the episode was practically how SKET Dance is a rip off of Gintama' but it is done with pure comedy. Also, about the ending, it is noticeable that the ending of the anime is different from the manga. With the manga ending with the sket-dan transporting to Gintama and the anime continuing to time travel through SKET Dance episodes and finally the Gintama Yorozuya going back to Gintama'. The manga was ended that way because the SKET Dance pages was ahead of Gintama during that issue. As for the anime, the ending was different because the manga chapter was probably too short that it was only made as the first half of the anime. Also, it was different because Gintama' is aired on Mondays while SKET Dance is aired on Thursday. So, the crossover episode of Gintama was already over before the crossover episode of SKET Dance is aired that's why the SKET Dance can't go to Gintama anymore.

Probably, the funniest part in the show is actually the beginning. The part wherein the Gintama just came to sket-dan’s clubroom and they started commenting on everything about the SKET Dance being a cheap copy of Gintama in a school setting but then, I kind of feel that the joke about the intonation of “Bossun” failed in the anime and went really good in the manga. Anyway, as for those who didn’t understand the joke about the same voice, recall that Gintoki said “It’s my voice!” when Switch actually spoke (through his laptop, that is). It’s practically because both Gintoki and Switch are voiced by Tomokazu Sugita. The same goes for Shinpachi and Teppei, they are voiced by Daisuke Sakaguchi. 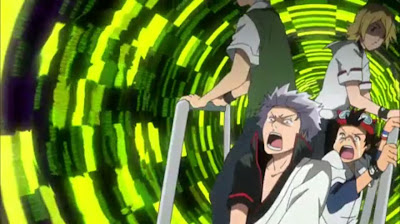 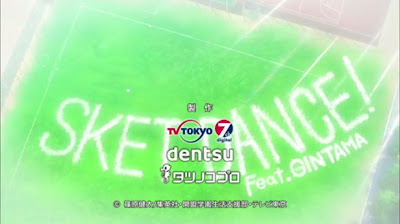 Before I forget, did anyone else heard Switch say tuturuu~ when he announced that he added a time travelling function as a joke? 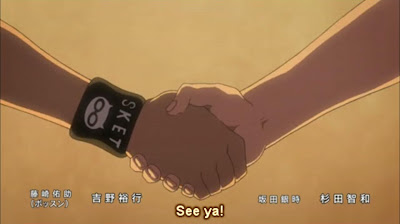 Overall, the crossover is definitely funny and interesting despite the flaws the episode has shown. Probably, you’d find it funnier if you’re also a fan of Gintama though it’s not really necessary to watch Gintama to understand the episode. It’s funny as it is. 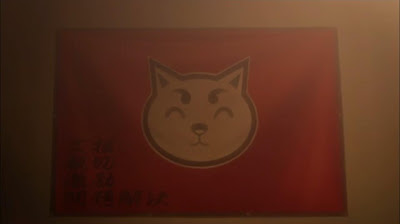