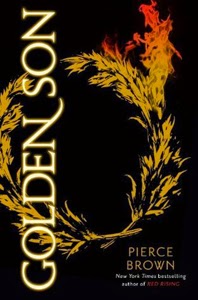 As a Red, Darrow grew up working the mines deep beneath the surface of Mars, enduring backbreaking labor while dreaming of the better future he was building for his descendants. But the Society he faithfully served was built on lies. Darrow's kind have been betrayed and denied by their elitist masters, the Golds - and their only path to liberation is revolution. And so Darrow sacrifices himself in the name of the greater good for which Eo, his true love and inspiration, laid down her own life. He becomes a Gold, infiltrating their privileged realm so that he can destroy it from within.

A lamb among wolves in a cruel world, Darrow finds friendship, respect, and even love - but also the wrath of powerful rivals. To wage and win the war that will change humankind's destiny, Darrow must confront the treachery arrayed against him, overcome his all-too-human desire for retribution - and strive not for violent revolt but a hopeful rebirth. Though the road ahead is fraught with danger and deceit, Darrow must choose to follow Eo's principles of love and justice to free his people.

He must live for more.

THIS BOOK. THIS SEQUEL. THIS SERIES. THE THINGS THAT HAPPENED! THE THIRD BOOK WHEN!? NEXT YEAR!? YOU'VE GOT TO BE KIDDING ME!!

Golden Son DID NOT disappointed me. It's everything I expected it to be AND MORE. It started off differently from Red Rising which took its sweet time developing Darrow's cause. This, on the other hand, had thing going already (but I guess that's a given because this is a sequel).

I honestly didn't read Golden Son  in one sitting. I really wish I did but there's this part of me that isn't fond of space battles so I put it down at times. Golden Son's take on war is really very exciting though. There's always something going on. There's always conflict. There's always doubt. It's very interesting to see that the things that happened in the Institute were really happening right now in a bigger scale and in more dangerous situations.

While Red Rising described the color-coded hierarchy of the Society, Golden Son successfully showed it. In fact, everything that Red Rising described, Golden Son established them. It strengthened everything. It brought the Society to life. Further more, the I like how politically inclined this is - how others join alliances for convenience, how others would do anything for the bloodydamn position they want, and other twisted things people with corrupted minds do.

There were a great amount of characters introduced here and I liked each one of them. Everyone really left a mark in me. While those that were already in Red Rising became closer to me especially Mustang, Sevro, and Fitchner. I wasn't a fan of Mustang then but Golden Son made me like her. It made me trust her. I like how Darrow and Sevro strengthen their relationship here - it even made me cry. Yup, Golden Son made me bloodydamn cry and I didn't expected that.

Another thing I really love in here is how much twists and revelations it contained. This bloodydamn book kept on throwing things to me even though I'm still not done digesting other stuff. It's fast-paced. It's full of unexpected twists that had me gripping the book. It's full of revelations that had me crying at times.

OVERALL, Golden Son is a bloodydamn GREAT SEQUEL. I think it's actually better than Red Rising. It's more intense. It's got more unexpected turns. It grabbed me emotionally.

What I Like: (1) the fast pacing, (2) the further development on Darrow, (3) the Society and how much of its color-coded hierarchy is shown - you can really see the distinction between the colors, (4) the exciting battle scenes, (5) how much each characters really left a mark to me, (6) the closeness Darrow and Sevro had in here, (7) the bloodydamn revelations!, (8) how much it touched me emotionally

What I Didn’t Like: (1) space war (generally because I don't like space wars, sorry) other than that, none really.