For starters, I was never of huge fan of slice of life anime but I do watch them. And when I saw Kimi to Boku. on the list of Fall 2011 anime, it was no doubt that I'll watch it but I was surprised on myself for looking forward to it every week.

I'm pretty much aware of the fact that a number of slice of life anime fans were disappointed of how Kimi to Boku. became the typical s'life anime (meaning the s'life anime with girls and doing random things about everyday life and making them seem funny or whatever) but with the bromance part. What I mean is that yes, it's a slice of life anime with guys instead of girls but what seem to bother most anime fans is the fact that these guys seem so close to each other that their action is no different from the girls on other s'life anime. Did I get that right? :\ 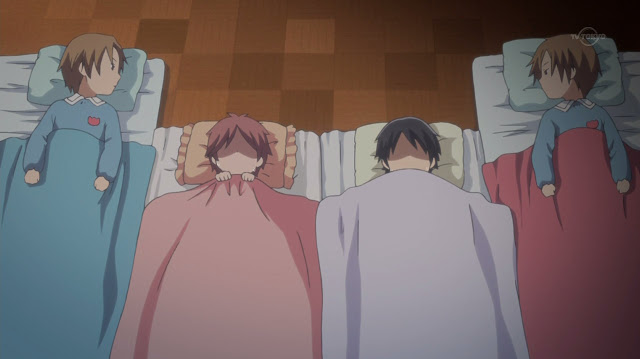 On my point of view, Kimi to Boku. sure is an enjoyable anime to watch. Story-wise, it changes episode-per-episode and one episode isn't entirely connected to the other but it's still better to watch the previous ones as to understand some of the jokes. As for their comedy part, I'm not entirely sure if it's everyone type of comedy but it sure has captured me, include to that their tidbits of looking back on their nursery and middle school times. I laugh at most part of each episode and sometimes get a little sad when it comes to the dramatic parts though they aren't entirely that moving. But then, what Kimi to Boku. mostly caught me in other that the comedy is the romance. Each one of them had their fair share (is it?) of romance in the series and I have to admit that the romance episodes has got to be the most exciting ones.

Character-wise, they're pretty standard yet I still enjoyed all of them. Though I'm pretty sure that they aren't entirely developed but I guess sometimes it jut doesn't matter if you're going to think that it's just another slice of life-comedy anime. But then, looking deeper on their emotions each episode, you can definitely understand them and know what kind of person they really are.

There're the Asaba Twins, Yuki (Kimura Ryohei) and Yuta (Uchiyama Kouki), who plays poker face for most of the times and still gets me laughing with their sarcastic punch lines and it's still pretty easy to tell them apart of each other  in terms of both physical appearance and character. There's also Matsuoka Shun (Toyonaga Toshiyuki) who has got to be one of the densest guy ever. Tachibana Chizuru (Irino Miyu), on the other hand, is the liveliest on the group who obviously always keeps the energy up. And finally, Tsukahara Kaname (Ono Yuuki) who, in terms of comedy, is the straight guy who has to pin point every stupidity his friends does. Together, the five of them make a good combination for a comedy series :D

Other than the standard story and characters, the art looks really good. That's the first thing I noticed right from the very beginning. I like how everything seem so natural and light. The art reminded me of Hourou Musuko way back at Winter 2011. But then, what seems bothering (and I certainly didn't noticed it until I read it from another blog) is how annoying all of the characters' eyes are crossed. Well, it's not entirely annoying but somehow, it's a bother if you look at them directly. As for the music, a different insert song plays every episode and somehow that's what makes the episode moving.