[REVIEW] Such A Secret Place 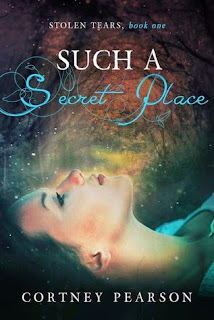 Raids splatter across the news--Arcaian soldiers are stealing magic left and right, using it against the people they steal it from.

When sixteen-year-old Ambry Csille's brother gets taken in one of these raids, her utter fear and panic should be enough to invoke tears in any normal world. But for Ambry, tears are a thing of the past.

Because of a spell, people can no longer feel emotion; not enough to cry, and definitely not enough to defend themselves against the tyrannical soldiers stealing her people’s magic. A rare vial of enchanted tears chooses Ambry to reverse the spell, and soon she finds herself the target not only of the Arcaians, but of battle-scarred Talon Haraway, who wants the tears for his own reasons.

All Ambry wants is to rescue her brother, but when her tears get stolen, Ambry determines to work with Talon to get them back. Any day the Arcaians could drink her tears. Any day they’ll succeed at draining her people's magic completely, and all hope will be gone—not only for her brother, but for her world.

I'm a very hesitant high fantasy reader. I've had disappointed moments with high fantasy regardless of its popularity or author. I can't really remember why I requested for Such A Secret Place. It couldn't be its fantasy aspect because I'm not a huge high fantasy reader. So I'm guessing it's the interesting plot without looking closely to the world.

The blurb says everything about the story. Such A Secret Place has a very interesting world. The idea of not having emotions really captured me together with the whole setting of the story - the Arcaians stealing magic, their use of magic for a lot of things. Pearson created a world I see in anime. It's almost very engaging to read especially when things started going into the hide and chaise route.

Ambry is a likable heroine. She's very easy to understand. She's always having that brave and strong face yet at the same time she cane be stubborn and funny. Together with Talon, Such A Secret Place became such an enjoyable read. The way the two met and how Ambry basically responded to Talon was nice. The development of their story was one of the things I enjoyed here. Talon is this guy who makes you think about who he really is. He gives off the mysterious vibes in a not-annoying way (because sometimes I do get annoyed at the supposedly mysterious guys).

Ambry and Talon's adventure is really just the best aspect of this book. As the two of them go after Ambry's tears which was taken by Arcaians, Ambry discovers a lot of things - trust, betrayal, love... She also discovers that the tears does not only chooses her randomly - she's chosen for a reason, she's chosen for things she did not expect.

OVERALL, Such A Secret Place is a nice fantasy-adventure read. It's recommended for people who enjoys fantasy. While I did not completely find the world building good, there's a second book to this so I expect it to further develop or explain the world even further (or better).

What I Didn’t Like: (1) it feels that the world needs more development or imagery (I wasn't completely absorbed into it),

Cortney Pearson is a book nerd who studied literature at BYU-Idaho, a music nerd who plays clarinet in her local community orchestra, and a writing nerd who creates stories for young adults. Cortney lives with her husband and three sons in a small Idaho farm town.