Sword Art Online 14: how the heck did Kirito won the game? 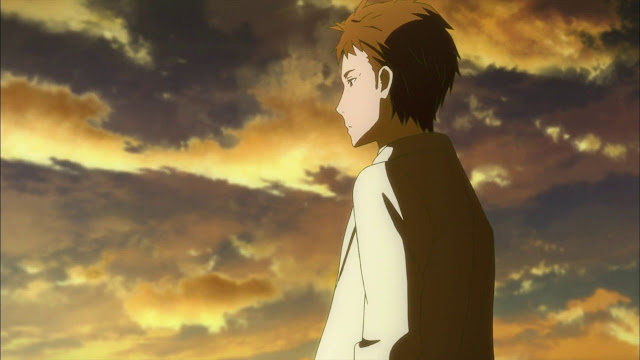 … AND thus the Aincrad-arc ends with me getting pissed off at how the heck Kirito cleared the game.


When I said last time that I was looking forward at how they are going defeat the boss last episode, I was really wrong for getting my hopes up. The battle for this 75th floor boss is the worst battle scene done in SAO yet. They defeated him with normal and continuous attacks with only 14 deaths? Seriously? And I thought background characters kept on flying everywhere.

Anyway, that boss battle ended up being Kirito's confirmation of Heathcliff's character. I like how Kirito revealed Heathcliff as Kayaba Akihiko to the surviving players of the boss fight. His first reference being his one-on-one with him and he confirmed it by directly attacking Heathcliff. That was one risky move but it was one of the most interesting parts of this episode. I guess Kayaba Akihiko being Heathcliff is an interesting part of the twist. Besides, watching over the players for 2years (and probably more) is a very boring task. Joining the fun is definitely the best thing to do :3 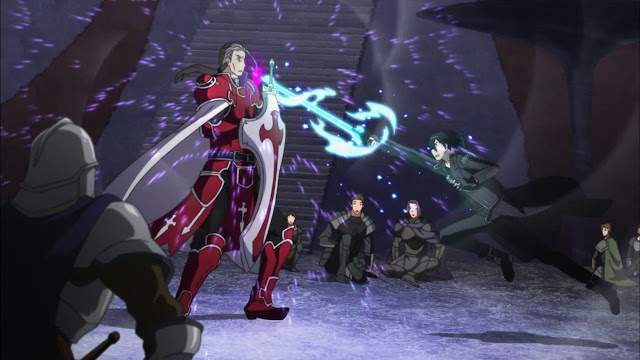 Honestly speaking, I've done my homework on spoiler and background check on Kayaba Akihiko. I was just waiting for the moment that Kirito will reveal it all to us and they'll fight each other to death. Every time I try to think how it'll happen, Kirito actually killing Heathcliff never came to my imagination clearly, it seemed impossible. And how he did it here really did just proved that it is impossible. Although the moment that Kirito will fight him [Heathcliff] is something that he's looking forward to since he even gave Kirito the Dual Wielding sword skill which was unique to only him.

Now going to all the drama before the battle, I'd say that it worked out pretty bad. HAHA. Kirito was giving off his death messages to his friends namely Klein and Egil. And for Asuna, he has nothing. He just told Heathcliff to prevent Asuna from killing herself during the first few days. How is that a nice thing? No, it's nothing nice. It's being unfair. He wants Asuna to suffer longer until she kills herself. 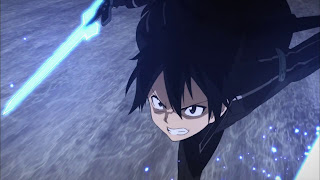 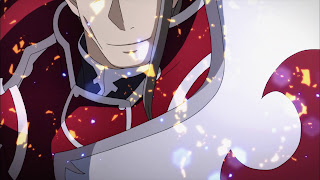 Their battle wasn't the least surprising. They're like the complete opposites of each other being an offensive player, the other being defensive. What really pissed me off here was first, how Asuna was able to move and prevent Kirito from dying. How did that happen? I have no idea. I doubt Heathcliff will just remove the paralysis from Asuna. I don't think he's that kind of guy. He won't do something unnecessary when it was so clear that he's winning.

The second thing that pissed me off was how the heck Kirito just killed him. Let's go back to that scene, Kirito was sulking because Asuna just died. He doesn't have a will to fight then suddenly Heathcliff stabs him and he watches his life points goes zero. To be honest, I was looking forward to Kirito actually fighting back quickly before his life points are completely gone. But no, that didn't happen. He suddenly remembers Asuna's words, I believe in you Kirito. And his life points finally drops down to zero. "You are dead" message shows up then what? He dramatically dies and bits of his characters scatter out and suddenly his scattered parts comes back together. And Kirito kills Heathcliff?~ HAHA. That was a real joke. And I though SAO is a fair game. How the heck did Kirito came back after having his life points down to zero just to kill Heathcliff? 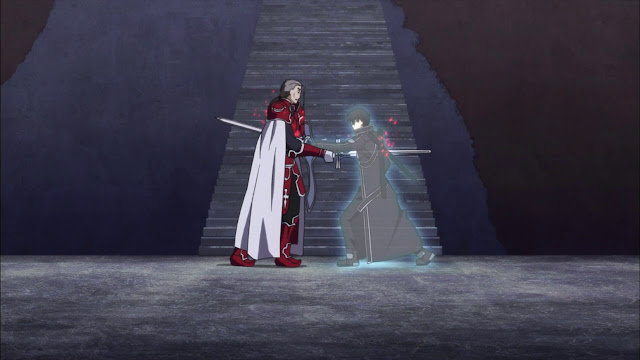 Enough complaining. When Kirito finally reaches the 'final phase', he meets Asuna there and they went on drama mode with Kayaba Akihiko. The music there is definitely the best out of all the BGM in SAO yet. Although it's not something that moved me. Anyway, let me go to their discussing with Kayaba Akihiko. I honestly didn't understand much of Kayaba's point here. He said he made SAO because it was his dream of creating "a world that surpasses all our laws and all our restrictions". Personally, I think that he just wants to play God in his very own world as seen from how he actually seem to enjoy making the storyline of SAO himself: his creation of the Knights of Blood Oath, training players, granting Kirito the unique skill and even having the final boss as himself at the 100th floor.

Other than Kirito's revelation of Heathcliff's identity, I think that Asuna and Kirito's farewell is one of the best parts in this episode, at least for me. It was plain romantic and I like it when Asuna asked for Kirito's real name and even called him Kazuto :3 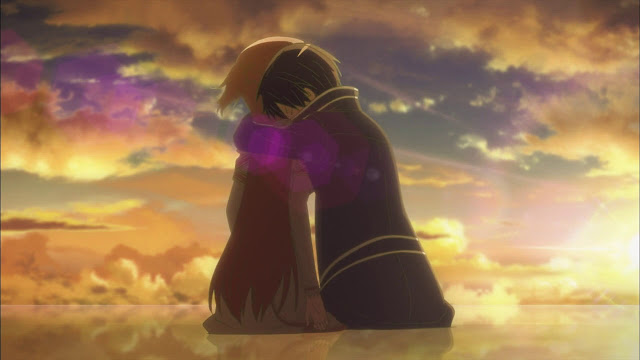 Okay, this turned out longer that I expected~ Anyway, I don't really know how I'd wrap my view up on this episode. The end of the arc seems pretty good but also pretty disappointing. If you've read through this post, you know why. Fantasy is fantasy. I will never understand how the heck Kirito got back to the game and killed Kayaba Akihiko. I don't want to annoy myself by thinking about it. Next arc should be up soon(: Not so excited but I do hope that we'll see some real world parts even just the next episode :3 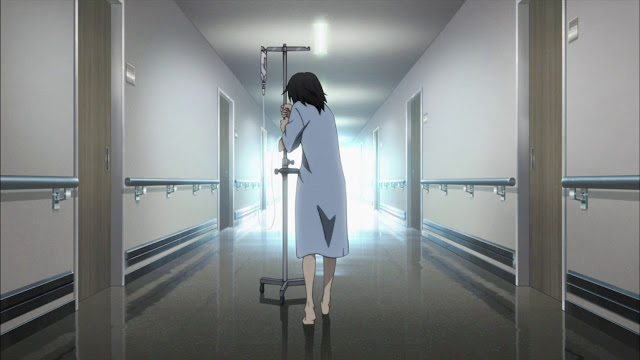