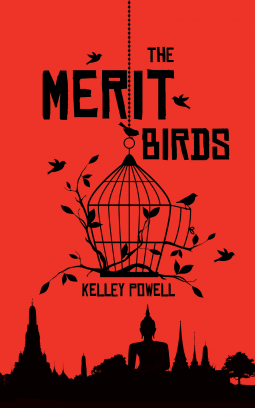 Eighteen-year-old Cam Scott is angry. He's angry about his absent dad, he's angry about being angry, and he's angry that he has had to give up his Ottawa basketball team to follow his mom to her new job in Vientiane, Laos. However, Cam's anger begins to melt under the Southeast Asian sun as he finds friendship with his neighbour, Somchai, and gradually falls in love with Nok, who teaches him about building merit, or karma, by doing good deeds, such as purchasing caged "merit birds."

Tragedy strikes and Cam finds himself falsely accused of a crime. His freedom depends on a person he's never met. A person who knows that the only way to restore his merit is to confess. The Merit Birds blends action and suspense and humour in a far-off land where things seem so different, yet deep down are so much the same.

I picked up The Merit Birds because of the mere mention of Laos. I've never read anything about Laos. Heck, I've never really read anything that was set in South East Asia. So when I saw Laos in the lurb and how it seems to go over the culture, it was an insta-read for me.

The Merit Birds is unexpectedly great. At first, I get confused with names and titles such as 'Meh' for mother most likely because I'm not familair with Laos names. But after a couple of chapters, I'm already settled and found myself attracted and absorbed to Lao culture. Perhaps it's its closeness to our culture (PH culture) but either way, Powell's writing really placed me in the heart of Laos's capital, Vientiene.

Cam is Canadian from Ottawa. He moved to Laos with his mother whom he only refer to as Julia because of a certain event. He doesn't like Laos. He doesn't like how his life completely changed because of it. Then there's Seng, a poor Lao who dreams of going to America thinking taht life there is all good like how he sees it in television. And there's Nok, Seng's younger sister, too smart to work as a massage therapist but too poor to enter a university.

The first half of the novel allowed me to picture Laos, its culture, and its people. It allowed me to understand these there characters. Later on, Cam and Nok slowly built a romantic relationship. While the two of them seem nice together, I didn't quite feel for them generally because there weren't really enough interaction between them. The development of their relationship began with narrations - what Cam thinks of Nok, how beautiful she is, blah-blah-blah... - and what Nok thinks of Cam - how she sees him as a regular 'falang' (foreigner) to something more than that.

When it goes to the second half, the Lao New Year, and things happen, you just know how things will go. It was, of course, very unfortunate but this is were both Cam and Seng crosses. This part is where they fully developed - their struggle, their worries, the things they learn - and built their characters that made me smile at the end of it all.

OVERALL, The Merit Birds is a beautifully written coming of age story that involves family, friendship, and culture. This is definitely a MUST READ.

What I Didn’t Like: (1) the building up of Cam and Nok's relationship,

~this book was provided in exchange for an honest review~