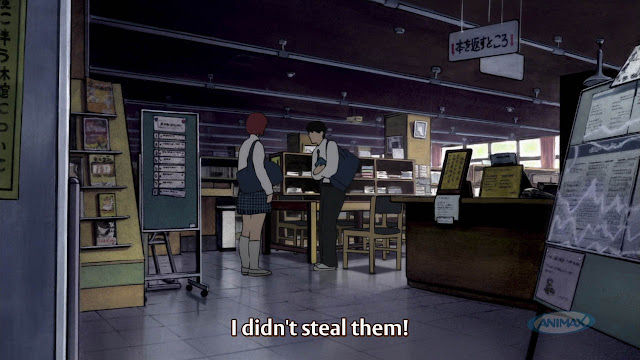 Aside from Aku no Hana's uneasy atmosphere, one of its greatest appeal is how natural everything seems to be.


Life is a bit boring at times and Kasuga, as I have mentioned last post, is your typical guy out there. Nothing special about him. But then, there are times that life gets a great twist which makes every single day a bit more interesting or bit more nerve wrecking than before. For Kasuga, his highschool life's biggest twist happened when he picked up the pouch where Saeki's gym clothes are and panicked when he heard something from the door. He acted on impulse.

He wasn't stealing it as he had said. I believe him. He was surprised at what he heard from outside so he suddenly took off with the clothes hidden under his uniform as to not let anyone see what he has taken (obviously). He took it because… he wanted to… further take hold on something that belongs to Saeki and not let others see him? He's no stalker. Not yet. And he won't be base on his character. He took it because… he can't talk to her. He's not close to her and there's no way he could probably be.

Now for the part that we've all been waiting for, the forming of their contract. Their first encounter honestly made me laugh. It felt as if I was watching some kind of live action and the guy runs off leaving his bicycle. He freaked out. He panicked. Or whatever. He was funny. The animation was fnny. But that certainly seriously made him think about confessing. Better confessed than be revealed by the class creep, huh? If he had the guts, that is. SINCE he run away from her, all she was left to do was to give him a message so that they can meet and blackmail him along the way. You know that's where this is going, right? Well obviously. 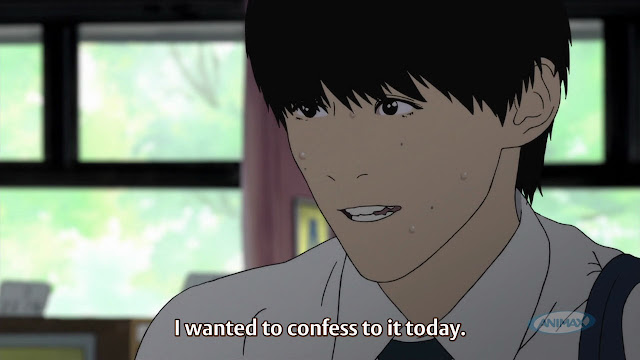 The moment Nakamura goes on with the contract, I just knew that something is bound to happen. Then Saeki comes to the scene. What was he suppose to tell her? That he took her gym clothes by 'accident' and was too ashamed to return it 'cause he'll be labeled as a pervert for the rest of his highschool life (not that its anything exciting for him)? Okay, that was his chance but it was easier said than done. Nakamura pushes him and his face falls on Saeki's chest. Now that's bound to make next episode a bit more interesting. He'll just have to write an essay about it, right? Now let's see what he'll be doing :3

Okay. I'm just blabbering but whatever. I'm excited to see how things will go. How his 'essay' will be. And how Saeki will see him the next day :3

On some side note, I'd like to give props to the nice monologue by Kasuga's noob voice actor, Ueda Shinichirou. I honestly like he sound so natural in here. Okay, maybe he isn't giving much effort on it but whatever. I just might look forward to more of his narrating next time. And I'm pretty sure that he'll have more room for improvements (but I doubt he'll be anything as amazing as Kamiya Hiroshi).
Posted by czai at 4/13/2013