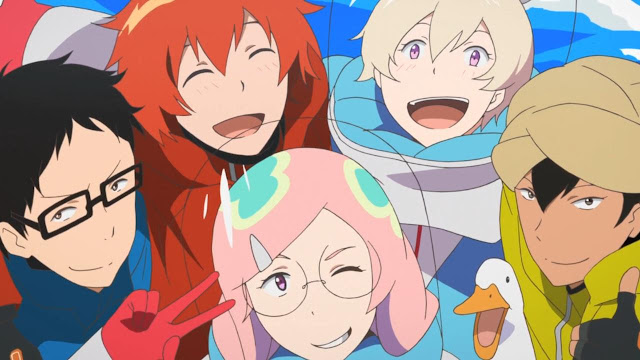 Tsuritama is just the 3rd anime that I was able to finish for Spring 2012 and in no surprise, Tsuritama just ended very well. It wasn't the most moving conclusion out there but it was at its usual fun to watch episode of Tsuritama with an unexpected ending (on my opinion, that is) because I believe that most of us are expecting this to end the same way winter season's Ano Natsu de Matteru did.


First of all, let me give a quick overview of Tsuritama's main plot or where the story basically revolves. It's practically all about fishing an alien out of the ocean of Enoshima. Yup, that's about it. Anyway, what's pretty interesting about this series is that it opens with a slice of life feel to it with Sanada Yuki (Ohsaka Ryota) moving to Enoshima and suddenly meets Haru (Irino Miyu) who proclaims himself to be an alien and needs Yuki's help to save the world. Getting deeper into the series, it gives off that sci-fi feel to it with all the alien talk and an anti-alien organization under the name DUCK BUT this series focuses more on the relationship and development of each main character.

As what webkid had been going around for the last couple of posts, the idea that Tsuritama is an original anime gives it an edge not only to its partner noitaminA show, Sakamichi no Apollon, but an edge to almost all the shows this season. Tsuritama is practically good in a lot of ways even just looking at the plot, the story and how it was presented. It's overall core value which is friendship has been very prominent in the show ever since the beginning. With the staff's 1-cour anime in mind, the pacing of Tsuritama had been very well laid out unlike what happened to Sakamichi no Apollon these last episodes. The whole idea of fishing was really a great element of the series. If we all see Kaoru and Sentarou from Sakamichi get bonded by jazz, in Tsuritama, we get to see the four main characters get bonded by fishing. Their time together through fishing had made solid bonds between the four of them. 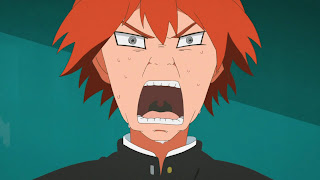 Going through the characters, my initial thought about them (before watching the series) is that they (or rather the entire series) seems like a collision of Danshi Koukousei no Nichijou and Kimi to Boku. They usually give off the relaxing kind of feeling when you watch them and at the same time they are very fun to watch. I never even got bored of this series because of the 4 main characters. I really like how the four of them were very well developed throughout the series. First off, Yuki had change so much with Haru's intervention in his all-so quiet and friendless life. He learns how to make friends and what it means to have one through Haru and the rest. As for Haru, I like how as an alien, he tries to understand human emotions. His curiosity about human emotions that is shown throughout the first half of the series is always so interesting to see. Now for Usami Natsuki (Uchiyama Kouki), seeing how much he also changes right from the very first time he met Haru and Yuki has been a great ride. Although I can't relate so much on what he feels, I was moved by his relationship with his family the most. Finally for DUCK's agent, Yamada Akira (Sugita Tomokazu), the thing I liked the most about him was the time when he finally joined Haru and the rest to fish. There weren't much Yamada moments at the beginning of the series but as the second half opens, we see development on Akira and by the end of Tsuritama, it was pretty refreshing to see him value friendship despite being a member of an anti-alien organization (or whatever). 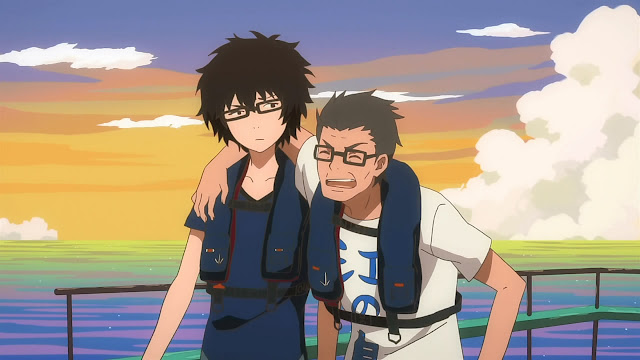 I wouldn't go deeper and discuss so much on the secondary characters but all-in-all, most of them played big roles in the development of each main characters. To give a particular example, there's Yuki's cool grandma, Sanada Keito (Hirano Fumi) who explains to Haru his curiosities particularly about Yuki's actions. Despite not getting the most attention, the secondary characters were definitely not left out in the series that we get to see all of them have a piece of action by the last part of the series.

As for the music, there aren't much that particularly stood out for me. Although I have to admit that the music did well in the series in giving more emotions to each scene. The OP of Tsuritama is something that I always enjoy listening to and I definitely never skip it :D I'm pretty sure most people don't skip it as well. That OP is just so fun to watch. Anyway, the voice action of the series is pretty well done. The four main voice actors were really great headed by Miyu Irino as Haru who's also voicing Tachibana Chizuru from Kimi to Boku who has the same quirky character as Haru that shifts from being noisy to being emotional anytime around. The newbie voice actor, Ohsaka Ryota who voiced Yuki also did a great job. I'll be looking forward to more series with him(: 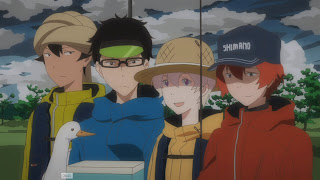 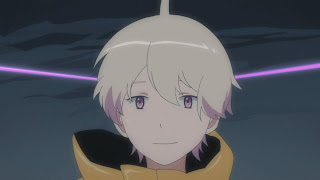 Finally for the art and animation, I have to particularly say that this has got to be another great thing about Tsuritama. I really love the vivid colors and the fancy art. It's very attractive and will never get you bored. When the scene calls for an emotional part, the beautiful lively colors can always turn to the right mood. The dark scenes (in the final part) were really great and doesn't really go off with Tsuritama's style in art. Also, at the final episode, when all those fishes went straight into the sky cutting the clouds, I was really amazed about how great it looked :D

Overall, this series is definitely one of my candidates for best anime this season. Everything about this series just came in perfectly executed from the story to the character developments to the mood settlement up to the stunning art. Tsuritama is definitely a must to watch series most especially for those who want some anime with the friendship theme.
Posted by czai at 7/01/2012