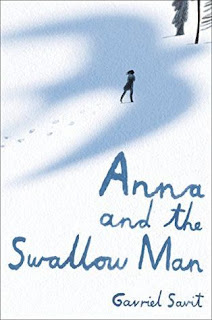 Did I miss something?

Anna and the Swallow Man is a novel set in Poland during WWII. And oh, how I love books set in WWII or set in war periods in general. But oh, how confused this book has left me. This is one of those reads that made me just go: 'wat?' after reading the last words.

Anna and the Swallow Man is a book told in third person that gives off a feeling like I'm watching a children's cartoon with narrations, the characters acting as the narrator explains, and such. That doesn't mean, of course, that this book is for children. I think that the writing is just one of the things that made me want this book. That and how much I want to really, really, really understand what's really going on. That doesn't mean I don't understand the story. It's just that I feel that there's something more to what's being said.

Anna did not know what she'd expected, but it had not been this. They walked silently, the two of them, and the air between them was heavy and hard. Had she been wrong to alert the thin man of the coming danger? -p31


ANYWAY, I really enjoyed this book, story-wise. I enjoyed Anna and the Swallow Man's adventure. I genuinely liked the Swallow Man's approach to making Anna understand the life on the 'Road'. This book felt like a book about survival during the war times. And given that it is told in Anna's point of view, there are things that are not explicitly told. And that's fine. I like thinking and I that's another reason why I simply kept on reading this book.

OVERALL, Anna and the Swallow Man is a historical fiction that involves a vulnerable point of view. It's a story of survival and trying to understand the workings of a world that's so difficult to live in. It's got great writing that really, really made me go back just to read it over and over. BUT all in all, I really, really just don't understand how to get around this book (thus the no-rate review which has never happened before!!!) which is why I will surely get back to this soon. Don't know when will that be though.


"I do not know everything, my dear," he said. "And I do not desire it, either. I cannot imagine it would be very pleasant. Knowledge is, of course, very important, because the things that we know become our tools, and without good tools at our disposal, it is quite difficult to remain alive in the world. -p228


POINTS ARE: (1) the writing is so pretty you should grab it (or not?), (2) it's WWII, friends. Who doesn't grab a book that's set in WWII? (you? okay then.), (3) Anna is a kid who forcibly grew up because of her environment (encountered this in Broken Angels - which is a really great book, btw). You should love kids who grow up on such environments, and (4) I'm possibly overthinking. The story may just plainly be as it is. (lol). It's an adventure kind of thing. Surviving Life. Eating. Hiding from the Bears and the Wolves.