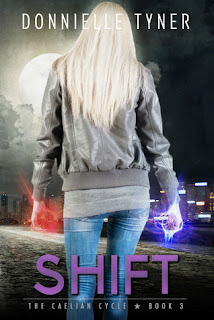 So much excitement! But that was such a quick end.

Shift is the final book in the Caelian Cycle which I must say was a good series. I liked its world (the separation of those with and without Talents, how it started, and the inequality that's further rising) and its heroine (who really went through a lot since her Talent came out). It has good story development and as the series goes, Tyner basically delve into Sadie and into her Talent further.

I think Tyner has slowly but surely develop Sadie. She's a heroine with special abilities. She didn't know anything about her family until recently. It's so easy to like and understand her. And Tyner basically further develops Sadie into a stronger person who can stand for herself yet at the same time, knows that there are people around her who'd catch her. I also like how her ability was further molded into something really interesting.

"I believe if you can find your way through all the pain you've suffered and come to terms with who you are now - then you will finally know peace." -loc372; eARC


My only gripe for this book is how it lack action and thrill. There were so many things going on and surely they were interesting. I like how a few more things were revealed which really built up Sadie further but then after all the planning and Talent discovery, the finale (or final battle) was just a chapter or so (but admittedly, it was epic!) and honestly lack the action.

POINTS ARE: (1) the world is super great (unusual powers = Talents!), (2) the heroine, Sadie, had such great development, (3) the romance also got a lot better (I LOVE how it's not overpowering the story, how it's there but as a super to Sadie, and a romance to ship!! haha), (4) the series was well wrapped up. The ending was beautiful and highly satisfying (but the action was not satisfying. let's move on from that, shall we?), (5) did I mention how much I LOVE the news reports in-between chapters?

OVERALL, Shift is a nicely written finale. It may not be an action-packed way to end a series, it had its own way of bringing unity into its world and that is utilizing Sadie's ability which I must say went through a great deal of things. The center of this series is Sadie. She had a great development and her ability evolved so much as throughout the series. The Caelian Cycle is a good quick read for those who enjoy scifi/fantasy dystopian that involves characters with unusual abilities.