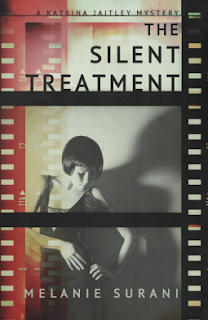 Twenty-eight year old Katrina Jaitley is rebuilding her life after escaping an abusive boyfriend. The last thing she needs is the mystery she stumbles on during a bout of retail therapy. But she can't ignore the coil of film -- a piece of movie history -- she finds hidden inside her purchase. Unfortunately, Peter, the handsome host of the estate sale, disappears before Kat has a chance to return it to him.

Curious, Kat watches the strip and is shocked to witness the murder of a famous 1920's silent film star by a fellow actor. When a news article cites Kat as the film's owner, her already complicated life goes from bad to worse. Someone begins stalking her. Are they trying to silence her or what she has discovered?

I just have mixed feeling for this one. I expected full blown thrilling mystery but I received something more - something unexpected.

The Silent Treatment opened in such a way that made me feel as if I know Katrina Jaitley (aka Kat). It immediately let you in to Kat's personal life. I was first let on to her life before getting into the mystery the blurb suggested. I like how there's a huge focus on the heroine yet it's a bit of a let down that the mystery side of the novel isn't really that intriguing.

Why did I find it not that intriguing. Going to the blurb, we are told that Kat was able to get her hands on an old unreleased film from a 'handsome man' named Peter. The idea is really interesting ut after knowing what the film contained and knowing who owns it practically tells you, the reader, everything you need to know. Nothing more. Let's just say that to keep the story moving forward, there were complications to holding the film.

Why you should still read this. There's suspense here. It's a nice plus for the writing. Surani writes in a really suspenseful way. You'll grip the book and find yourself holding your breath until you read through what happens.

There's also that smooth development on Kat's character. This is what The Silent Treatment further gave me - a coming of age story. I mentioned that the novel opened with an intro to Kat's personal life. As the story runs, you further understand what Kat went through and see how things around her family (how they see her decision making and such) cleared. The novel ended in such a way that there's a part of Kat's personal issues that has been resolved and a part that was left hanging for the next novel in the series. While something is left a bit opened ended, the conclusion was really satisfying.

OVERALL, The Silent Treatment is a nice coming-of-age story about Kat Jaitley. Her development involved a nice suspenseful pacing that kept me reading. Along with this is a nice guy whom I personally ship Kat with and a sweet fictional actors, films, and issues. It's a really nice read. It's a recommended one if you want something suspenseful to read yet at the same time something you'd feel good reading.

What I Like: (1) Kat and her character's development, (2) how it opened with Kat's personal life, (3) how it slowly introduced the mystery, (4) Peter (the 'handsome man' Kat met), (5) the suspenseful pacing, (6) the fictional film, actors, and issues, (7) the satisfying ending

What I Didn’t Like: (1) how the mystery just felt plain and not really something to be solved (I blame my expectations for this)