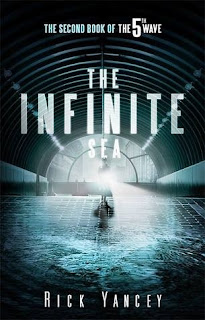 HOW DO YOU RID THE EARTH OF SEVEN BILLION HUMANS? RID THE HUMANS OF THEIR HUMANITY.

Cassie Sullivan and her companions lived through the Others' four waves of destruction. Now, with the human race nearly exterminated and the 5th Wave rolling across the landscape, they face a choice: brace for winter and hope for Evan Walker's return, or set out in search of other survivors before the enemy closes in. Because the next attack is more than possible - it's inevitable.

No one can anticipate the depths to which the Others will sink, nor the heights to which humanity will rise, in the ultimate battle between life and death, hope and despair, love and hate.

I really loved the 5th Wave. The storytelling was great, the whole concept was very interesting, and I enjoyed the characters. While the third book is still MONTHS AND MONTHS AND MONTHS AWAY, I picked this up because I am in need of a good sci-fi book since I was in a reading slump.

The Infinite Sea opened up nicely with an intriguing prologue that made me go: oohh.. they have something new under their sleeves. The Infinite Sea has new point of views (POV) that allowed me to understand a couple more characters that were not really highlighted in the first book. I like the fresh perspectives and how I never felt lost when the POV switching happens.

The romance is crap (except for the everything that involves Ringer :P)... If you've read my review of The 5th Wave, you'd know that I DID NOT LIKE the Cassie x Evan romance - their relationship and how it 'developed.' Their romance here is the same. I like Cassie but I hate her whenever she acts so helplessly in love with Evan Walker. It feels like he's the only thing she thinks about. It's like for Cassie, Evan Walker is LIFE. And that's real crap (and I'm probably just exaggerating at some point but... this romance is just NO!). Then all over the book, Mr. Yancey seems to fill the pages with love triangles (or squares or whatever else!). I was so bothered. What is this - a scifi novel with a dash of romance or a romance novel with a tiny scifi element? If it's the latter then please kill me.

The book is going downhill for me (well somehow) until Ringer's POV goes back and I suddenly found myself glued to the book. Ringer's POV (somehow) revealed things.I really found this part unputdownable because of how things were becoming more intriguing. Ringer suddenly becomes a vital character in the book - she's not just Zombie's love interest but something more. Aside from these, everything talked about in this part kind of made me think (made me come up with my own theory). Along side the interesting direction of things the romance between Ringer and Razor really caught my attention. While I'm a huge Ringer x Zombie fan, this couple also got me going. I AM NOW TORN!! OHMYGOD!!

The Infinite Sea also had a great dose of suspenseful action. It's all over the book! The first half was more me wondering - are they in danger? Ohmy now what? Will they make it? - and other shiz like that. The second half, on the other hand, I was mostly holding my breath and cheering for Ringer and Razor to make it - GOGOGO!, what the heck does this mean!?, ohmywhat'sgoingon?

OVERALL The Infinite Sea is an action-packed sequel that kind of miserably tried to add so much romance. The romance is literally going all over the place but the storytelling is still as solid as before. It made intriguing turns that really made me want to grab the third book already!!

What I Like: (1) the new POVs, (2) the psychological dilemma the characters are having, (3) the intriguing direction the story took come second half of the book, (4) Razor!, (5) the suspenseful action

What I Didn’t Like: (1) the bloodydamn romance - the triangles and how it seems to take over the book/story, (2) all those Cassie and Evan moments (ohgodsi'msorry), (3) got a bit confused at things (don't know if this is good or bad since this is also why I thought about the things going on)