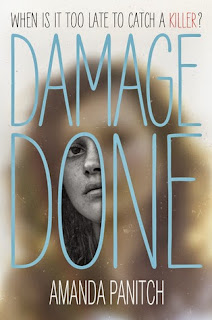 "In the vein of E. Lockhart’s We Were Liars and Gillian Flynn’s Gone Girl, Panitch’s novel delivers a heart-pounding, emotionally charged story." --SLJ

22 minutes separate Julia Vann's before and after.

Before: Julia had a twin brother, a boyfriend, and a best friend.

After: She has a new identity, a new hometown, and memories of those twenty-two minutes that refuse to come into focus. At least, that's what she tells the police.

Now that she's Lucy Black, she's able to begin again. And her fresh start has attracted the attention of one of the hottest guys in school, a boy who will do anything to protect her. But when someone much more dangerous also takes notice, Lucy's forced to confront the dark secrets she thought were safely left behind.

One thing is clear: The damage done can never be erased. It's only just beginning. . . .

In this deliciously twisted contemporary thriller, family can be a real killer. For fans of We Were Liars and readers who love unique multiple perspectives that leave clues like breadcrumbs until they reach the stunning conclusion.

Let's Back Track. Julie Vann was traumatized. She was the only survivor of a mass murder. The prime suspect is her brother, Ryan Vann - her other half. She can't seem to remember everything that happened.

While the story obviously seemed interesting, intriguing, and suspenseful, Damage Done started slow for me. It could be my reading slump issues or the fact that the story just started in a really boring away. There certainly were snippets of what happened. Julie (now known as Lucy Black) tells bits of the story which was interesting but how present life was the opposite. The beginning focuses on Lucy spending time with her best friend, looking at boys (aka Michael), and just living life (trying to be normal and all that).

What Caught My Attention. What grabbed me is the slow revelations on what happened to Julia - the bloodshed that happened. In between chapters, you'd get bits o the story. The slow unraveling of what traumatized Julia really glued me to the book. Questions like - Why did Ryan did it? How the heck did things ended the way it did? - circled my mind. I needed to read further to know the truth - the whole truth.

Pass 50% of the book, there seems to be lapses in the storytelling. While they were filled in later on, it kind of bothered me when I was reading because I really wondered why things suddenly happened. The thing is it's told in Julia's point of view (with the occasional 'medical reports' of Ryan's psychiatrist) but I get surprised as if a conversation happened but I blinked and missed it. But this is just me since everything was explained later on.

OVERALL, Damage Done is a intriguing psychological mystery. While it started slow for me (half blaming my reading slump for this), it really gets better as I read on. The revelation at the end made me nodding and really liking how everything was put together. But I had to admit that the ending (the final chapter) was a but going over the top.

What I Like: (1) how it gets better as I read on, (2) the reports of the psychiatrist, (3) how everything is slowly revealed, (4) how it put everything together - how it all made sense, (5) that climax (ohgodthatclimaxwascrazy = that moment before Julia tells the whole story)

What I Didn’t Like: (1) how it didn't immediately grabbed my attention, (2) Julia and Michael's relationship - it felt so one-sided, (3) the lapses in the storytelling, (4) the ending (unrealistic? overdoing it?)