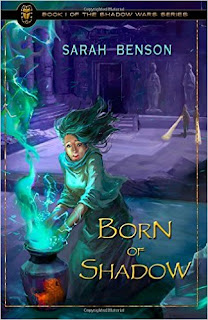 On her seventeenth birthday, Kami receives a mysterious artifact and a ticket to visit her estranged grandparents in Egypt. When she arrives, no one is there to meet her. Alone and in an unfamiliar country, she quickly discovers her missing grandparents are only part of a greater threat. Whispers of strange creatures made of a shadowy substance can be heard among the nomads of the desert. A new queen has quietly come to power, given strength by a powerful evil unleashed when she opens an ancient jar. She won't stop until she finds the remains of Alexander the Great, convinced that his body holds the secret to her becoming a god. Kami must rely on a band of misfit friends she makes along the way to save her grandparents and stop the queen. But does the handsome boy she just met have answers, or is he part of the reason for her grandparents' disappearance?

I decided to give Born of Shadow a try because it's tied up to Egyptian History and I like history more so if it's something from an interesting country like Egypt. What this book did to me though is that it brought me to Egypt, took me places, and brought me into an exciting adventure.

Kamilah, or better known as Kami, lives uncomfortably in California trying to please her classmates and making things work with her mother. She received an invitation from her grandparents on Egypt asking her to visit them. Yet her grandparents from Egypt were the once who did not accept her mother and even kicked her father out of their lives. Kami still decides to go but things suddenly became so messed up.

Here's a rundown of my Born of Shadow reading experience:

* Kami is your regular heroine. There's nothing special about her. She has a scarab which was previously owned by her father. It's what ties her to the mess that's going on (aside from the fact that her grandparents were abducted). As plain as Kami gets, it makes her very easy to be with. I enjoyed her teasing character, and how she doesn't want to be a burden to others.
* I LOVE the adventure. The beginning felt more like a tour in Egypt. I enjoyed it. It feels like I was Kami riding with Liam and Haji as they (mostly Haji) talk about Egypt. Aside from the tour, there were also interesting facts given out regarding the place and interesting historical facts (which I can't help but try and read more about). If you like Egypt or would like to read a book about Egypt, this is definitely it! Did I mention that it centers on Alexander the Great? It feels that everything in here in well researched!
* Secondary Characters: Liam is Kami's love interest. I LOVE him especially when he teases Kami! Yasmin is Kami's cousin. I like her rebellious character. Haji is Liam's driver (and friend). He's an amazing tour guide (LOL). Sam and Chris were knowledgeable team members with their very own fighting abilities. I was surprised by their sudden appearance. I was like, why suddenly trust a stranger? But when you have nothing left to lose, why not? Their appearance changed the tone of the story a bit. They added more adventure and action.
* As the story goes further and further it gets more intriguing. I honestly have to admit I wasn't immediately engaged yet as I read on, things started making more sense to me (Zaynah's story and her sudden ability kind of confused me at first). The appearance of the shadow creatures where laid down slowly but surely. And everything toward the climax and ending were perfectly done - it was thrilling and really kept me reading.
* I LOVE the romance. It was subtle. I like how it started off really cute with Liam and Kami's small talk at the plane. I also like how it doesn't take over the story. It was done well and I even ended up shipping the two of them!! XD

OVERALL, Born of Shadow is a well written and well researched novel involving Egyptian History. It was an engaging and thrilling adventure, a great set of characters, and an ending that will keep you wanting for more. Born of Shadow is are recommended read for those who enjoy exciting YA adventure with a dash of history and romance.

What I Like: (1) Kami, (2) the secondary characters (especially Liam and Yasmin!), (3) all the historical facts!, (4) the adventure - especially the climax towards the ending.. that was really thrilling,

What I Didn’t Like: (1) it didn't immediately capture me, (2) the ending was a real cliffhanger - not in the usual frustrating cliffhanger kind of way but more like it ended in a battle climax