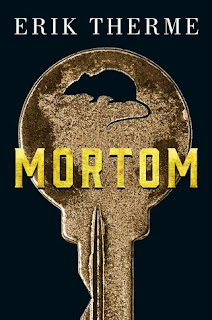 Andy Crowl barely knew his recently deceased cousin, Craig Moore, so he’s especially surprised to be named as the sole beneficiary in Craig’s will. Not that there’s much to inherit: just an empty bank account and a run-down house.

Once Andy arrives in the town of Mortom, however, he’s drawn into his puzzle-obsessed cousin’s true legacy: a twisted and ominous treasure hunt. Beckoned by macabre clues of dead rats and cemetery keys, Andy jumps into the game, hoping to discover untold wealth. But unsavory secrets—and unanswered questions about Craig’s untimely demise—arise at every turn, leading Andy to wonder if he’s playing the game…or if the game is playing him.

Something’s rotten in Mortom. And this dead man’s game might not be all that Andy is doomed to lose.

A suspenseful read that kept me reading late at night!

the mystery.
My interest in the mystery and what is at the end of it were the main reason why I just kept reading page after page. At first, I thought that Andy will involve the police. Because why not? But Mortom is more of a psychological-thriller and suspense than crime fiction. And the mystery is a puzzle Andy must complete else something bad may happen to him OR to people around him (who knows? Okay, Craig knows. But he's dead. Now what?).
As Andy solves the puzzle, I think with him. You know me and mysteries. I tend to overthink. And at times, I find my thoughts being similar to Andy. AND at some point, I believe that that would really be the case. But Erik Therme had me guessing and guessing and ending up wrong. And in my opinion, I think it's a good thing -- means the twist was too good for my tiny brain. But seriously, the mystery was well-written and really worth the read!!

the suspense.
I think the suspense on this one is just too good!! Good in a I-can-visualize-it-in-a-movie kind of suspense. You see what I mean? Let me elaborate. You know how thriller movies have this background sound as if something will happen, and camera angles that act as if you're the one in the movie, and slow and suspenseful and heart pounding moment of just looking at a certain part of the house (only to find the character's friend at the other end. phew. that was a close call.).
But really, if you're looking for a suspenseful read, you have to grab Mortom because it totally had me eyes wide, heart pounding, and breath holding late at night.

the POVs & Characters.
There are two points of view (POVs): Andy and Kate, Andy's sister. I like the switching of their perspective. It makes the story more suspenseful to read and the mystery more intriguing (as some information are only revealed to the other). I also like their dynamics. Andy is super obsessed of Craig's puzzle and Kate is super in need of going home but for some reason, she's drawn into Debbie. There were times when they'd argue. I like these parts of the story. While it may seem like they're just arguing over petty things, these arguments establish their characters. Andy's unfortunate life and Kate's situation. And with this (along with the revelations later in the story), I ended up really liking both of them.

the small town.
Ummm... What better way to create an intriguing mystery and an elaborate puzzle but a small town where everyone knows everyone. While the cast remains small, Erick Therme was able to really establish the idea that Mortom is a small town where technology is limited and people know and gossip about each other. It's the perfect draft for such a suspenseful thriller.

the family.
Andy was Craig's cousin. The cousin whom Craig's mother constantly compares him to. Why did Craig left his will to Andy? I like how Andy slowly tries to make sense of this question as he solves Craig's puzzles.

the revelation.
ohgosh, the revelation is possibly the one part of the book that I had to ponder about after reading. The climax of the novel where a bit more suspenseful action happens really put me at the edge of my seat. The full revelation of things -- why Craig made this elaborate puzzle, how things are connected, and the ultimate reason that traces waaaaaay back -- were clearly explained and feels really well-thought off. I like how despite Craig's absence in the entire story, his presence is very clear throughout everything especially during the final revelation (that final chapter that really made the book for me -- that was a really great twist!).

OVERALL, Morthom is suspenseful mystery novel that kept me intrigued from start to finish. The thrilling writing really kept me at the edge of my seat. The mystery had me thinking and constantly making up theories. The characters were so well established. Mortom is a recommended read for mystery readers who enjoys suspenseful writing and a great twist!

{ how about you }
What do you think of a mystery-thriller written a dual POV? Do you think it takes out some of the suspense? Have you recently read a book whose twist you completely did not see coming?