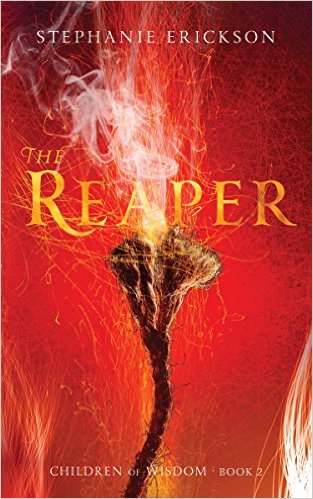 "The Thread of life is a delicate thing. It is so easily broken..."

My name is Michaela, and I'm a Reaper. I help the humans transition from their home on Earth after they die. Up until a short time ago, things were going well. But then, one of our best Fates was banished to Earth, people started dying before their time, and things went rapidly downhill from there.

Just when I thought things couldn't get any worse, I found seven misplaced souls trapped in the depths of hell. It didn't matter to me who had put them there, or even why they had. All I knew was I had to get them out. I couldn't just leave them there to suffer.

Who knew trying to find out and fix what had gone so horribly wrong would end with me surrounded by misfit Fates while racing through the depths of hell? Trying to save not only the seven trapped souls, but also the entire human race, is not exactly in my job description...

The Fate was an 'okay' kind of read. I like the progression. I like Penn. I like Penn's development. I like how the ending intrigued me. The Reaper, on the other hand, felt like a dragging story with characters I end up either disliking or ignoring. I wouldn't say it's my expectation because I didn't expect much. I just want to know what happens next.

The Reaper features Michaela's, Penn's reaper friend, point of view. Do I like it? I think it's okay. Nothing special though. Completely unlike how I felt about Penn's. ANYWAY, The Reaper explored the things reapers do and basically how Michaela sees the issue. While Penn is stuck up being a 'keeper', I think switching to Michaela's POV is Erickson's way of moving the story.


"Because even one life makes all the difference in the world. It matters." -p45

And boy did the story move so slow. I mean I do see where it's going about a few chapters on and it's interesting. The problem is that instead of heading straight into the problem -- exploring it, knowing more about it, finding a way to fight it --, Erickson brought in an unimportant moment. Well for me it is. With that event, I'd say we get to see more of Hell and how you must never trust a Demon (and believe me, I will not trust a Demon even without reading this book) and how Penn basically became an ass annoying right here. After the events at The Fate, I thought he's a man (or Fate) with good understanding and patience but here, he just lashes out each time he gets the chance.

Another thing that I did not like about this book is how 'god' as well as the angels do not do anything about the problem. Let's talk about this 'god' first. If I remember it correctly, Michaela barges into god's office and tells him the problem. At the end of it though, he ended up giving Michaela some sort of pep talk about her fight not being over and stuff like that. AND HE DOESN'T EVEN DO ANYTHING ABOUT IT!! I'm pretty sure because he's god he can do something about it. UGH. NOW about the angels, this actually happened later in the story but let's just say they're NOT DOING ANYTHING even though the problem or fight is happening right at the gates of heaven. And I'm basically like: WHY?

NOW let's talk about the good things. While the progression is, as I mentioned, slow, The Reaper ended in cliffhanger that made me want to read the final book. All those adventures and snooping around was also enjoyable to read. I like how they basically argue over Webber's 'fate' as well as problem the reapers were encountering. It created more questions and at the same time showed a part of what's happening because of the issue they encountered in The Fate.


POINTS ARE: (1) Michaela is a decent heroine. Not very outstanding but definitely okay, (2) the story moves so slow (how many times have I said this?), (3) Webber's time in hell was a dragging part, (4) some questionable moments for god and the angels -- why are you not helping!?!?, (5) I basically never cared about the characters though, (6) the ending was unsatisfying. (why end it in a cliffhanger-ish, inconclusive way? why WHY?)

OVERALL, The Reaper is a book that suffered second-book-syndrome (in my opinion). While an enjoyable to read, the story moved slow and certain events just annoyed me and made me want to put it down. Michaela is a lovely character though. She's emotionally strong unlike Penn. The ending was a major cliffhanger -- inconclusive and unsatisfying -- which is disappointing.

BUT please don't make me stop you from grabbing this book. It might not just be for me. Check The Literary Connoisseur's Review. She enjoyed it and found it better than the first book (unlike me). There are a few more super positive reviews out there on goodreads. So if you think you might like it, just go check out their reviews to convince you :)

Now I feel like a party-pooper because everyone at goodreads has given this a 4 or 5 stars. ugh.