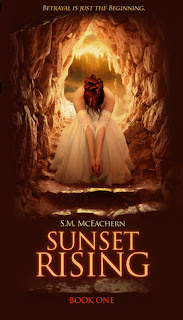 Desperate to find refuge from the nuclear storm, a group of civilians discover a secret government bio-dome. Greeted by a hail of bullets and told to turn back, the frantic refugees stand their ground. They are grudgingly permitted entry, but the price of admission is high. Two hundred and eighty-three years later…

Life as a slave in the Pit had never been easy, but for seventeen-year-old Sunny O’Donnell it was quickly falling apart. Her mother had been killed in the annual spring Cull, leaving her alone with a father who was no longer interested in living the short time he had left. Not that she blamed him for mourning. Her own heart was aching with overwhelming grief. But if they didn’t earn enough credits to keep their place inside the Pit, they would be kicked out into a world still teeming with radiation. That left her to earn the credits for both of them, and it didn’t help that her boyfriend, Reyes Crowe, was pressuring her to marry him and abandon her father.

Sunny didn’t think life could get any worse until a chance encounter with Leisel Holt, the president's daughter, and her fiancé, Jack Kenner, leaves her accused of treason. Slated for execution, she escapes with a man she considers an enemy and discovers she not only has to work with him to survive, but also to lead the revolution.

Sunset Rising may lack on certain aspects but it's has all things I basically enjoy reading in dystopian novels.

the world.
The world of Sunset Rising is possibly the reason I read dystopian novels. Admittedly, it did not offer me anything new from what I've previously read but I never really get tired of this setting: a society built on corrupt leadership, a well written and established unfair world, an involvement of slavery with an extremely high wall separating them from high class society members, and a community thriving on fear and necessity.

Given that Sunset Rising is the first book in the series, it successfully established its world. I was really engaged in it. I got to know its history. I hated its unfairness--the Cull, the place they live in, the limitations they have, the way their supervisors treat them at their jobs. I pity those who live in the Pit. S.M. McEachern was able to really explore the world. She made me visualize it (and it's not good). Sunset Rising was also able to stir the society to raise their hands and say yes to an uprising--it was well set up. I love how the people didn't just switched beliefs or alliances for convenience. There was always enough time for everyone to develop their views. I like how the people didn't just jump and say, "Hey, I'm in to your rebellion!" S.M. McEachern showed that starting a rebellion is not as easy as asking someone to join your club. It takes a lot of convincing, making them realize the unfairness of the world, and giving them the courage to stand up.

the heroine.
Sunny is a well developed heroine. She's a very strong heroine who's more than willing to protect everyone she loves. Unfortunately, it brought her to the pinch she's in. From someone who's too scared to be late for work, Sunny slowly developed into someone who's brave enough to encourage an uprising. It wasn't an easy thing for her--she has to face the wrath of the President and his cunning daughter; she has to run and hide for her life; she has to live with an elite; she has to hide her identity. All these things (especially the dozens of conversations she had with Jack) shaped Sunny into becoming more brave, more stable to stand on her beliefs, more knowledgeable of the society she lives in.

the romance.
Sunny and Jack's relationship is well developed. I like how they barely communicated in the beginning--how they have no idea how to stand beside each other, their uncertainty towards each other but gave in because of their need to trust the other. The romance did not happen immediately. I like how their feelings for each other slowly grow--how they simply live with each other out of necessity and started getting to know each other in the process. The development may sound formulaic but the author's approach to developing their relationship is simply good. I liked both of them, I ship them, I want to see them have that happy ending.

the pace.
Sunset Rising has a perfect pace. I LOVE: (1) the prologue was perfect--it set the background of the Dome well, (2) the betrayal early on in the novel was great--I think that it's one of Sunset Rising's greatest point, (3) the run and hide of Sunny and Jack--there was thrill and excitement there. I was rooting for them and I get a bit nervous at times. Will they be found? How? How will they escape?.

OVERALL, Sunset Rising is a post-apocalyptic dystopian novel that follows the genre's basic structure. It has a brave and well developed heroine who may or may not get lost in your sea of strong heroines. It has a romance that you'll want to see sailing. It involves a corrupt society that you'd want to bring down (and possibly burn down as well). It successfully established the world and spark the uprising for the second novel (which I must say I'm so interested to grab because of that ending!!!). Sunset Rising is recommended for those who enjoy YA dystopian series.

This review can also be found at: YA Insider.

{ how about you }
What do you look for in dystopian novels? -- the corrupt government? the fear of the society? the rebellion? the rising hero/heroine?