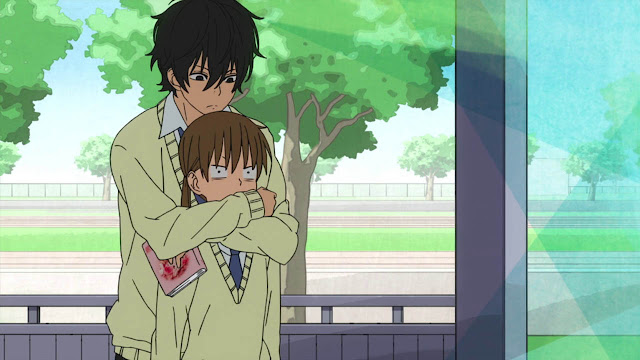 ~My first anime for Fall 2012. I am really glad that I wasn't disappointed at picking this series up. I like the comedy and the romance :3 The partnership of a serious-type of character and a carefree-type of character is really great.


I think that Tonari no Kaibutu-kun doesn't really stay away from the typical shoujo story. It's still a boy-meets-girl kind of thing. For some reasons they hang out and things like drama happen. Then they fall in love. I think that shoujo series just depends on the execution since they're all the same. And Tonari no Kaibutsu-kun did a great job in doing a really good rom-com story.

Director Kaburaki Hiro who worked on my favorite romance anime, Kimi ni Todoke, has put up a really great first episode in here. I like how the two of them were gradually introduced clearly. Also, the comedy in this series through Haru's innocence in almost everything had kept the entire episode very lively (and at times dramatic). 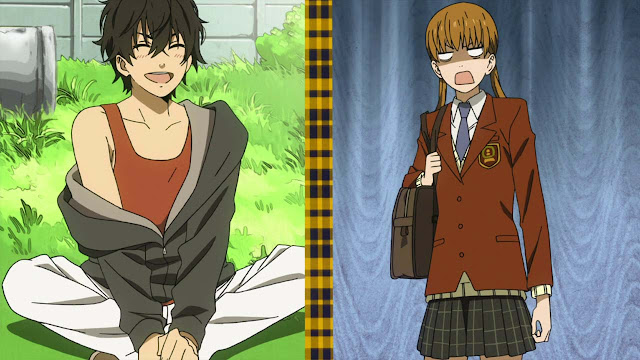 The team of two friendless characters and the development of their relationship is really fun to watch. Mizutani Shizuku (Tomatsu Haruka) is a bookworm who decided not to have friends so that she can focus on her studies. Yoshida Haru (Suzuki Tatsuhisa) is a seriously innocent guy who has the tendency to act on impulse. Haru's innocence plays a huge part in the comedy and drama of the series. Although I believe that it's not just Haru, Shizuku's lack of experience with people would also be a huge factor in their relationship and the series as a whole. On a side note, Haru being the one who got the highest score in the entrance exam is a pretty good addition to his character :3 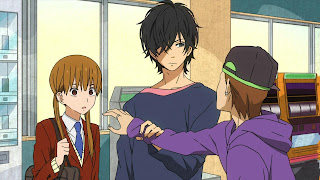 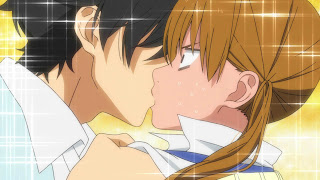 Taking the rom-com side of this series, the number one thing that struck me in this episode is the kiss that Haru just did :3 That was a pretty surprising mood and his reaction was really funny. Shizuku, on the hand, is probably more surprised than everyone of us and after hearing Haru's reactions, it seems more like his test of seeing if what was written on the book was right. HAHA. THAT book that their sensei handover to him seems pretty interesting. I wonder if he'll still be holding on to that on the next episodes. The part of how to "take care of" girls was really great. When Shizuku was like: You're quiet today. Then Haru replied, Because you care about studying a lot, for some reasons, right? If it's something you care about, it's something I care about. ~well said Haru :3

In an overall look on this episode, I have to admit that things did go by pretty fast. With just this one episode, a lot of things happen and despite how much I'd like to talk about the things that happened between the two of them, I won't because that'll be a real pain and really annoying. HAHA. If this series keeps this style up, I'm pretty sure that it will make my top 10 for 2012 :D