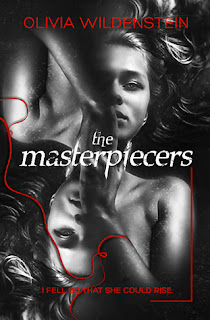 Nineteen-year-old Ivy Redd’s talent with a needle and thread has earned her a spot on a coveted reality TV art competition set in New York’s Metropolitan Museum. The prize: a significant amount of money and instant acceptance into the Masterpiecers, the school that ensures new artists fame and fortune. Her talent has also thrust her and her twin sister, Aster, into the spotlight.

Not that Aster needed help with becoming a media favorite. She managed that on her own by running over a wanted mobster. She told the police it was self-defense, because she couldn’t tell them the truth—the truth would make her sister look bad.

Locked in an Indiana jail to await her trial, Aster watches Ivy on the small TV hanging in the dayroom. It’s the highlight of her day, until she finds out what her sister truly thinks of her. Then, observing her sister becomes a punishment far crueler than imprisonment.

Intriguing from start to finish!


{ 5 Reasons Why The Masterpiecers is your next mystery read }

highly intriguing.
That's definitely the number one thing for me on this book. It opened with Ivy leaving Aster for a reality TV show. Why is Aster in jail? What is the connection of this reality TV show to everything? What is this talk about a quilt? What? What? WHAT? This really kept me intrigued. I keep on coming up with some elaborate theory with what the heck is really going on (HAHAHA, me and my overthinking mind with mysteries).

a sisters book!
Not a reason that involves mystery but I've mentioned it before and I'm going to say it again: tell me a book is a about sisters, I'll grab it blindly. LOL. Anyway, I really like the dynamics of Aster and Ivy. Ivy is... let's say a professional liar. And Aster is a diagnosed schizophrenic. How can you even trust her testimonies now? That's what I was thinking.

dual POV.
* Two points-of-view: Ivy and Aster. As I said, I like their dynamics. I like how they worry about different things. I like how they thought they know each other well. I like how they started doubting each other. The psychological-shiz going on between the two of them is crazy! Especially on Aster (for me, that is).
* Then there's the jail life and reality TV show life. It's really interesting how they try to get into this new life they are suddenly thrown into. They both meet new people. They are unsure of these people but they try to see who they can actually trust or at least lean on for the time being. Aster's life in the jail was really painful. There was a hopeful beginning for her until things started getting ugly and everything just ending up against her. Ivy's life on The Masterpiecers reality TV show was also a rough one especially with Aster's crime always coming up. Then there's the competition. Will she win? Will she lose? When things started getting even crazier - the entrance of a disqualified contestant, a death in the competition, and even tougher challenges - I just can't stop myself from my sticking my nose to this book!
* Their separate POV really made this book more intriguing because (1) they don't know the state of each other (okay, Aster is watching Ivy on TV but how about behind the scenes?), (2) they tell different sides of the same mystery (they do not bloody know what the other knows), and (3) ohgosh, THE MYSTERY UNRAVELS RIGHT IN FRONT OF THEIR EYES! (okay, not literally, lol. but I never realized it until later, okay?).


didn't see that revelation coming.
I predicted several YA mysteries (guess you can say I'm a pro. lol). This one? Oh, it just slipped off my overthinking mind. My brain was right here theorizing some big twist but Wildenstein presented me with a simple twist that I ended up telling myself: why didn't I saw that coming!? It wasn't a bad or good twist. I'd say it all depends on what you expect to see at the end. I expected wrong? Was I disappointed? Not really. I just set my bar way up high on the ultimate reveal zone. LOL.

romance?
Not a reason for mystery readers but it was a nice ride. Believe me. It's not exactly a romance I ship up to the moon and back. It's basically a nice romance with a smooth development - Ivy and Chase. They are cute from beginning to end (although I have to admit that certain parts of Chase really just makes me cringe and give me that second hand embarrassment or what. lol. that's just me, I'm sure of it).Then there's Ivy and Josh which I completely have no idea where it's heading. Just what is happening here?

My only gripe for the book is that there were certain points that made me feel that it's dragging or slow or something. But they were key points though. They are important parts of the reveal or of the mystery and basically how the two of them ended at the conclusion of this book.

OVERALL, The Masterpiecers is a contemporary mystery that kept me intrigued from start of finish. The pace doesn't feel very consistent for me but it still kept me reading. I like how the mystery was slowly revealed between Ivy's rough knowledge of Aster's crime and little lies and secrets and Aster's rough recollection and confessions. They were just perfect! The Masterpiecers is a recommended read for YA mystery readers :)