Welcome to my Summer 2016 Review Train stop hosted by Brittany from Space Between the Spines. I hope you guys dropped by and read the reviews for the previous stops: The Unexpected Everything @ Ready, Set, Read, Future Shock @ Always Me, The Summer I Turned Pretty @ Blue Eye Books, and Even If the Sky Falls @ Tsundoku Books. 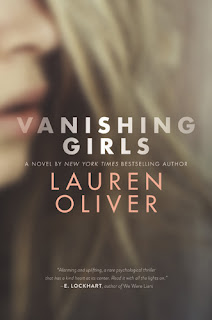 New York Times bestselling author Lauren Oliver delivers a gripping story perfect for fans of We Were Liars and I Was Here, about two sisters inexorably altered by a terrible accident.

Dara and Nick used to be inseparable, but that was before the accident that left Dara's beautiful face scarred and the two sisters totally estranged.

When Dara vanishes on her birthday, Nick thinks Dara is just playing around. But another girl, nine-year-old Madeline Snow, has vanished, too, and Nick becomes increasingly convinced that the two disappearances are linked. Now Nick has to find her sister, before it's too late.

In this edgy and compelling novel, Lauren Oliver creates a world of intrigue, loss, and suspicion as two sisters search to find themselves, and each other.

I bet this is one of those hit or miss books. It's not exactly either you like it or hate it. But more like it's an 'okay' read or a great read.

Sister Relationship!
When you tell me it's a book about sisters, I grab it. Easy as that. I LOVE all the reminiscing - when they talk about the things they do together, the secrets they keep, the understanding that happen between sisters (or siblings in general). Vanishing Girls became a bit more relatable for me because I have sisters! And the relationship between Nick and Dara makes me smile. I like how they backup each other despite everything. Let me tell you something, your sister is your best friend! And this book shows that!

Alternating POV + Non-Linear Sequence.
That's just how mystery-thriller goes. It's the thriller sequence that I really LOVE - piecing events together, understanding the current events, and predicting the ultimate twist of the story. Oliver was able to set the good thrilling and intriguing atmosphere. It kept me reading.
I like reading Dara's and Nick's before and after the accident - their quirks, their character, their perception of the other. It's interesting. The alternating POV was the biggest giveaway for me about the mystery though. But as a whole, it's a very intriguing read.

There's romance...
Yes, there's romance. I didn't feel for it though (which is why I question my interest in romance a lot! I have no idea what really appeals to me).

Intriguing.
Surely it is. Right from the beginning, the reader is presented with an accident. Why it happened? It's what we are all trying to find out. Then there's the missing child notice. Nick thinks it's related to what her sister Dara has gotten herself into. The pace and alernating POV made this more intriguing and unputdownable at times.

which sucks, by the way.

Anyway, I really blame my interest in mystery-thriller for this. When the twist was revealed, I was plainly: I knew it. I knew it. Now what am I supposed to do with my life?

Kidding and stupid reactions aside, here's a bit more objective opinion: If you're a big mystery-thriller reader, this will absolutely not surprise you (unless, of course, you still get super shock with every mystery-thriller twists you read). If you're interested in mysteries and has not read a lot (whatever your definition of a lot is) and would love a good intriguing read, I'd say give this a shot. While it didn't completely worked for me, I can't completely say it won't work for you. Just give it a shot if you're so curious because it is good despite its predictability for me.

OVERALL, Vanishing Girls is an intriguing read. Oliver perfectly incorporated a beautiful sister relationship into a mystery that's very difficult hold off. It's predictable for big mystery-thriller readers but may still be really interesting for those who don't read a lot of mystery and are interested to get into a good one. There's romance, sister relationship, mystery, and a good ending. A good read for me.

{ how about you }
Are you good at guessing plot twists or mysteries? How do you feel about a book whose plot twist you were able to guess? Do predictable completely ruins the book for you?


Check out tomorrow's Review Train stop @ A Kernel of Nonsense :)