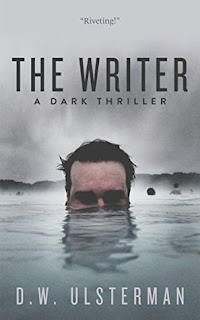 "Man is least himself when he talks in his own person. Give him a mask, and he will tell you the truth."
-Oscar Wilde

College journalist Adele Plank has been granted a rare interview with one-time bestselling author, Decklan Stone. He is a man largely withdrawn from the world following the tragic death of his young wife twenty-seven years earlier. Adele ventures to the writer's remote, private-island home in the beautiful San Juan Islands, and there begins a journey of dangerous discovery that will have her scrambling to unravel a mystery far more shocking and deadly than she could have ever imagined.

A new mystery-thriller series that's worth the time!

Amateur Sleuth.
Adele Plank is a  college journalist invited to interview her all time favorite author. Now that's two awesome things for a book background. The combination was really good and it gave The Writer its personality. Adele's thirst to know what really happened to Decklan Stone's kept me intrigued all through out the novel. Her role as a journalist kept her in loop into this buried mystery about Decklan's wife.

It's a small island mystery.
When the mystery or crime is set in a small place, it doesn't only make things more interesting because everyone knows everyone but you also get to roam around the place as you read. I wouldn't say I got to know the island but I had a good round. Ulsterman brought me there and I met the oh-so nice and interesting people of the island. It made me interested to pick up the next book in the series!

Intriguing.
I wouldn't say it's suspenseful but it was during its climax. The intriguing mystery really kept me reading this book. It had that amazing pull that made me just want to read it page after page. I read this in like two days and that's an achievement for me! I'm a slow reader and ending up finishing a book in a day or two is glorious moment when we're suppose to throw a party and be glad for another exciting read (or maybe that's just me).

Interesting Revelation.
Honestly I had my hunch. I was just trying to formulate the how and the why. All throughout my read, the question WHY hangs in the air. Perhaps I've read this mystery twist a couple of times and somehow I'm still not getting into it. It still surprises. It still catches me off guard. Not the 'who' but the 'why'.

There's an Epilogue.
I like epilogues! I like how they are usually told in a different way the story is told. In this case, the epilogue is Adele's article. It gives off a satisfying feel for the ending and at the same time a heartwarming happiness for those involved in the mystery.

OVERALL, The Writer is an intriguing mystery thriller that kept me reading page after page. Adele is a good main character, the people in the island are interesting, and the climax was very breathtakingly thrilling. The Writer is a good mystery read!


~I received this book from Kindle Scout~