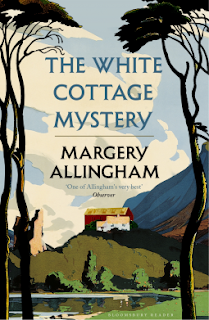 Eric Crowther collected secrets and used them as weapons. Delighting in nothing more than torturing those around him with what he knew, there is no shortage of suspects when he is found dead in the White Cottage. Chief Inspector Challenor and his son Jerry will have to look deep into everyone's past – including the victim's – before they can be sure who has pulled the trigger. The fact that Jerry is in love with one of the suspects, however, might complicate things.

The White Cottage Mystery was Margery Allingham’s first detective story, originally written as a serial for the Daily Express in 1927 and published as a book a year later.


{ 5 Things I LOVE about The White Cottage Mystery }

Intriguing from start to finish.
This really kept me hook from the start to finish. It's a cozy read - had me reading in a good pace, not completely thrilling yet not exactly boring. It's a good read that kept me interested all throughout. I LOVE how it made me suspect every single character - just how strong the evidences against them are, how strong their justifications are, and just how well Allingham did them.

W.T. Challenor is a noteworthy detective.
His strong sense of justice + his great character made me like him. His character really gave me that Poirot feel (Agatha Christie note here!!). W.T. questions everything. He may believe that one is the likely murderer but he will not pin on that person unless he gets actual evidence. The way he talks to his son, Jerry, is also very interesting. I like how he takes Jerry's opinion and explains everything. It's like I'm Jerry at times (other times, Jerry gives uninteresting opinions though).

The murdered is highly unlikable.
Everyone not only disliking but HATING Eric Crowther makes everyone an immediate suspect. They all have motives and some have strong means of killing him. I like how W.T. took each suspects one by one. Allingham's take of elimination but ending up in a dead end really made The White Cottage Mystery a more intriguing read.

The plot twist!
I guessed right, actually... But still... Just thinking about it really just made me admire and like Allingham. As a reader of mystery, I always go around: 'I didn't see that coming', or 'that really caught me off guard'. But this... this plot twist that I totally saw coming and did not caught me off guard was simply delivered so well that I it doesn't really matter even if I guessed it right. It's. just. great.

OVERALL, The White Cottage Mystery is a mystery that kept me hook from start to finish. It has a strong detective and a really good plot twist. It's highly recommended for mystery readers especially those enjoy Agatha Christie's works.

What's our favorite Golden Age mystery? Have you ever encounter a mystery novel that you predicted right but still completely fell in love with its genius plot twist?