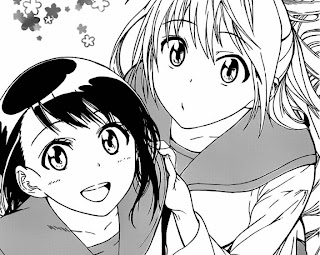 It seems that it took me forever to post something about Nisekoi and I feel that it’s been forever since I last read these chapter ‘cause of being heck busy.

This chapter really went on what I was expecting. The school knows it. And there’s no denying this anymore. The more reason for this relationship to turn into reality, yes? 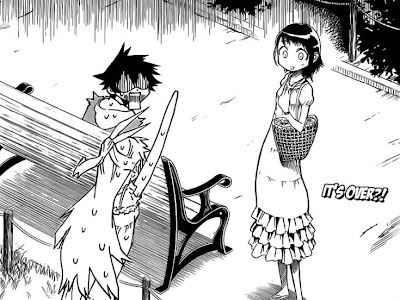 The sudden meeting with Onodera really did excite me. Moreover, she actually heard Raku saying her name. Too bad (or is it?) Chitoge suddenly burst her energy on calling Raku “darling”. How fancy. LOL. They were like: Raku + Onodera, chatting – Chitoge, thinking of how to not make their relationship seem fake in front of the gang & yakuza – Raku + Onodera, still chatting. – Chitoge suddenly enters the scene and was like: DARLING!~ - Raku = WTH!? – Onodera = silence – Chitoge = Shimata! Wrong timing! – I was like: LOL.

Ahh… SO Raku’s initial reaction, as expected, was denial. Definitely he doesn’t want Onodera to think that they really are going out since he likes her and she’s his number one prospect to be his childhood promised girl. Well, Chitoge knowing how much Raku likes her, she gave them the time to actually talk. But then, so much for talking. Raku definitely can’t tell Onodera that they aren’t really going ‘cause of annoying Claude’s presence who still doubts the hell out of their relationship.

With their moment together, Raku took the opportunity to ask Onodera if she’s the girl who’s holding the key to Raku’s locket. And as expected because of Onodera’s character, she denied her ownership. I don’t really want to blame her for hiding it but now it’s tougher for both of them.

Too bad for Raku, he still can’t recall his promised girl but his dream does look so sweet.

Okay, so when Raku and Chitoge entered their classroom, everyone immediately congratulated them. It’s kind of weird that their wishing for the whole class not to know their relationship but to think of going on a date in public without even a disguise. LOL. Well, too bad for them. Furthermore, they can’t deny their relationship ‘cause stalker Claude is right outside their classroom window probably eavesdropping.

As for Onodera, she always give hints that she actually like Raku (or is that a hint) by actually saying his good points. It does seem that she has been observing him, yes? But he just doesn’t get it. But then, when she said that, “I can see why she likes you.” The look on her face says that she’s confessing indirectly to him. And Raku was like: What do you mean? More importantly, by the end of the chapter, Onodera dropped a key, could that be the key to Raku’s pendant? Things sure are happening fast, huh? :D