I have to admit that Ben-To was not really on my list to begin with since I find fighting over half-priced bento kind of ridiculous but after reading a review of the first episode from a blog, I decided to add it to my list and I have to say that I was not entirely disappointed. 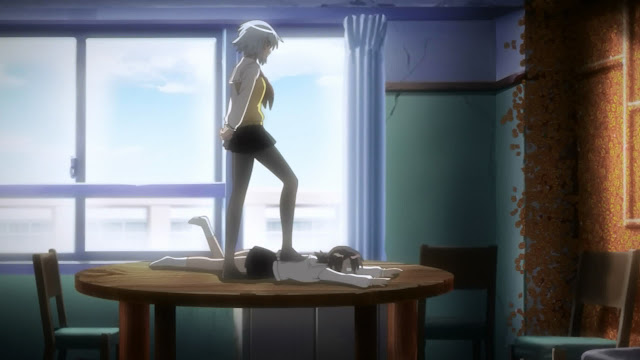 The main idea of Ben-To is that these so-called "okami" or wolves fight each other in the supermarket/grocery to get the bento they want in half-priced. One night, main character, Satou You (Shimono, Hiro),  enters a supermarket to buy some food for dinner. But when he was about to grab a bento he suddenly lose consciousness and when he checked out the supermarket again for bento, they were already sold out. The next night he came there, he saw the war going on over half-priced bento and met Yarizui Sen (Ise, Mariya) and was invited to join the Half-Pricer Club and since then he enters the war over half-priced bento.

What made Ben-To interesting is basically its ridiculous story together with its typical comedy. At first, it was typical every night fight at the supermarket for bento and meeting other wolves. It was good and I enjoyed them most probably because of Satou :D But then the main problem in here is the final arc which somehow dragged the anime down (so much for wishing for a good ending). I would like to write my entire complain on this but it might turn out to be a spoiler so I'd like to keep quiet about it.

Other than the failed final arc, I would also like to take my time complaining about the characters. Well for one, I don't have any complains on the main characters: Satou, Yarizui, Oshiroi Hana (Yuuki, Aoi) and Shaga Ayame (Kato, Emiri). Certainly they were likeable characters and I enjoyed every episode mainly because of them, most especially both Oshiroi and Satou which had been the funniest ones (for me, that is). Side characters such as Agohige (Higuchi, Tomoyuki), Bouzu (Takahashi, Ryoukichi), Chapatsu (Nakamura, Eriko), Inoue Asebi (Taketatsu, Ayana) and Nikaidou Ren (Okitsu, Kazuyuki) were certainly enjoyable as well. But then, I was  disappointed with Kaneshiro Yuu (Miyano, Mamoru) for making such a brief appearance. At first I thought he's going to be a major side character and I ended up being disappointed. Also, I have to admit that I really disliked the Shiraume Ume (Kayano, Ai). Not only does she talk less about what she's intending to do but she also hit Satou really bad without even hearing his explanations. 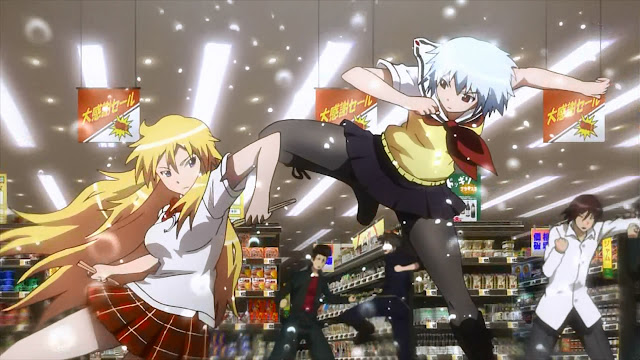 Forgetting about how disappointed I was, I still enjoyed Ben-To. For starters, it doesn't take a huge plot to entertain me, that's for sure, but throw in some simple battle and a couple of comedy acts and add to that the peculiar idea of Ben-To and you already have some interesting anime that's probably worth some time. The battle scenes are not entirely my favorite but definitely not bad either. Story-wise, it could have been better, the final arc was a little drag but it could still depend on who's watching. As for the characters, they were fun to watch, I get excited, I laugh and I certainly also got annoyed but combine them all, they were good. Fan-service? Expect a little, starting from the very first episode. But for those who aren't fond of those, they're aren't really anything too flashy to make the show look annoying ('cause I certainly am not into fan-service either). Music-wise, nothing really stood out other than Satou's ringing tone which I would also like to put on my phone. As for the art, it's pretty decent, meaning, not entirely good and not bad either.

Overall, Ben-To is a fairly interesting anime to watch. It's nothing big and probably not top 10 material. But it sure can be a good anime to marathon on spare times :D

Note: This is not entirely my first attempt to write an anime review but this sure is my first time posting a series review online. I'm not yet good at this so please bear with me(: