Though last chapter was a little off, I have to admit that this time, it's pretty interesting and funny. Every page was funny and I was seriously imagining it as an anime because Raku's reactions were really epic. 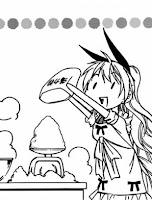 Kirisaki sure is a messy & unpredictable cook
It was really funny when Raku was freaking out with everything that Kisaki's doing. From measuring 90g of flour to beating the eggs. But Raku sure is nice, don't you think? Well probably it was only because he got totally pissed off of Kirisaki's cooking. But still, he did helped her and more importantly, their cooking turned out unexpectedly well. I seriously didn't expect that but that sure was good, huh?

Onodera's the next thing
I can't entirely judge how Onodera's the next popular girl to Kirisaki since I've never actually seen most of their classmates but it sure became a shock to Raku since he knows that Onodera's a quiet girl and probably someone we can all think that doesn't entirely make a huge impact to other people. Guess that was wrong. BUT why wasn't she that popular before? Kind of weird, huh?

They're pretending & it's obvious && where's Claude?
Well, it sure is obvious that they are not entirely in good terms simply through observing how they treat each other. How much they seem to yell and each other in just about every page of the chapter. Plus, Raku's best friend (I assume) - the glasses guy (whose name I forgot) seems to have notice Raku's dilemma but probably he still doesn't have the exact idea yet that Raku actually likes Onodera. I wonder how long will their fake-relationship last? Raku's friend could know it any time soon, Onodera already overheard them that they are pretending and Claude is MIA. Too bad.

Onodera's Cake…
Ahhh.. Raku's been trying his best to take a peek at Onodera's cake and it turns out her cake is for her mother. Moreover, since we all know that she likes Raku, she still did her best to make one for him and it seems that Raku learned something new this chapter, never judge a book by its cover. LOL. Remember when Kirisaki's cake looked so burnt and yet it tasted good? Onodera also had the same thing but it's the other way around. You get the idea :))