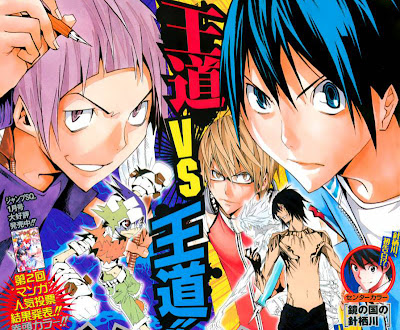 I’d say that after last chapter’s sudden problem, things instantly worked out just like that. And I seriously thought that Reversi’s weakness was going to be a big arc. Well, that sucks. 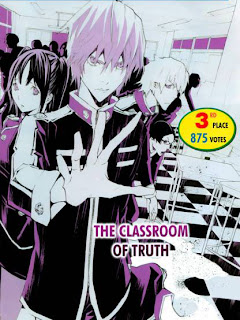 Well, that was a really interesting poll. After seeing this, I suddenly thought of all the good manga and one-shots featured here in Bakuman and here’s my top5:
1.       Classroom of Truth by Nanamine Tooru >> There’s no doubt that this is my number one ‘cause ever since I read this, I really enjoyed it. Plus, it made me read Enigma :D
2.       Detective TRAP (疑探偵ＴＲＡＰ) by Ashirogi Muto >> Ashirogi’s very first serialized manga definitely is my favorite. What’s not to like, anyway? Too bad it lose popularity because of Ashirogi’s hiatus.
3.       PCP (Perfect Crime Party) by Ashirogi Muto >> I found PCP an interesting manga because of the psychological elements Takagi is trying to pull here. Plus, I certainly enjoyed the part of Bakuman when Mashiro and Takagi were coming up with this.
4.       You Can’t Reach Me by Hiramaru Kazuya >> I forgot the Japanese title (x.x). This is based on the popular shoujo manga, Kimi ni Todoke and it’s written by one of the favorite characters in Bakuman, Hiramaru-san!
5.       Otters 11 by Hiramaru Kazuya >> If you haven’t read the one-shot of Otters 11, this could be your best opportunity to do so because it certainly is comedic even if the protagonist is a weird talking otter in a business suit. 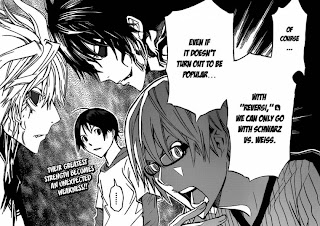 Sure every series could have their weakness but then, let’s just say Reversi’s is something quite difficult to handle on the writer’s part because of its fixed storyline and characters. There could be a number of things Takagi can do to lengthen Reversi like what he just did in this chapter, he wrote a chapter with more battles than dialogue which shadows Reversi’s strength, Takagi’s great dialogues.

The Solution…
When Takagi finally came up of his solution for Reversi after talking to Mashiro, Ohba-sensei and Obata-sensei’s previous manga, Death Note suddenly came to me. Probably it’s because Takagi and Mashiro were talking about Reversi not being a long running series but is still a popular series with good quality. 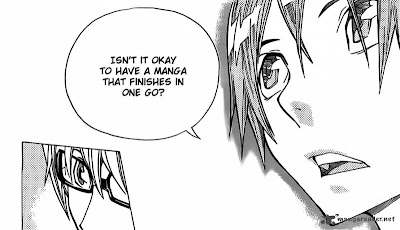 Death Note sure is a really popular series even up until now. I wasn’t able to follow the rankings of Death Note ‘cause I still don’t read manga when it was being publish but I’m pretty sure that Death Note has made a huge impact on many people. Though the quality isn’t at best during the second half of the story, it still has its good points. Plus, the ending sure is outstanding. With a short 108 chapters, meaning two short years of serialization, Death Note had become a manga even non-manga and anime fans even knows about.

And somehow, I think that this kind of popularity is something Ashirogi wants for Reversi. The popularity that even after years later of its serialization, many people still knows about it.
Posted by czai at 12/14/2011