I really enjoyed this chapter most especially Hiramaru’s proposal to Aoki-san :D

I was surprised with Hiramaru’s sudden urge to go on a second ride on the Ferris wheel. But then, I was even more surprise that he desperately searched for the ring inside the cart, taking off his suit, while Aoki-san is there. But then, I was really glad that Aoki-san isn’t one of those really dense female characters. In fact, when she heard Hiramaru-san say “ring” and corrected himself, she already knew what’s going on, why Hiramaru was so nervous the entire day and why he looks so desperate even taking out his suit right in front of her.

She saw Yoshida-shi outside of the cart and finally initiated the move for Hiramaru-san. She was like: “do you best and say it.”But then, Hiramaru’s head went blackout so he suddenly said, “please make me happy.” Ahhh… Being too nervous is bad. But then, that didn’t matter to Aoki-san, actually it was funny that Aoki-san seems to be the one that proposed to Hiramaru-san when she said, “marry me. Please make me happy too.” I was like, awwww :3 I’m really happy for the two of them.

Volume 1
Other than Hiramaru and Aoki’s engagement, the editorial department is also talking about the upcoming release of the 1st volumes of JUMP’s potential flagships, Reversi and Zombie☆Gun. An initial of 300,000 was printed for both of them and Reversi is followed by 50,000 more copies for the second batch while Zombie☆Gun printed 100,000 more copies for its second batch. Through the second batch, Mashiro and Takagi can already see the difference between Reversi and Zombie☆Gun. But then, everyone just keeps on saying that Zombie☆Gun has more sales because of Niizuma’s previous series, Crow. Well, I couldn’t really disagree to that since Crow really was a popular manga and has sold over millions of copies. But then, what really separated Reversi and Zombie☆Gun was the third batch printed. Reversi was asked for 30,000 more copies while Zombie☆Gun is confirmed to print 900,000 copies. That’s really surprising for a 1st volume. I mean, over 1 million copies sold? That’s amazing. 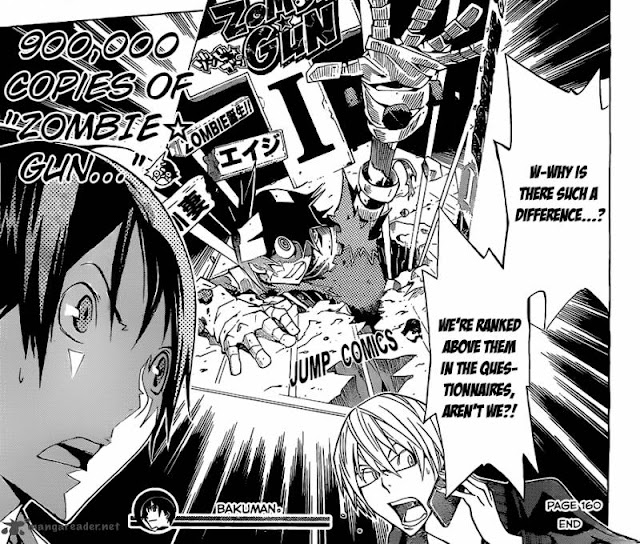