Nisekoi never fails to make me look forward to the next chapter because of its epic cliffhangers. Well, this chapter certainly didn’t open up that well but as the story goes, it gradually becomes interesting and at the end…

Key to an old bookshelf?

Yeah, right. Like I would buy that. But then, Raku bought it. It was funny how Onodera can’t make up her mind on what excuse she was going to use for the fallen key that looks really old. For one, Raku’s heart skipped a beat and seriously thought of the key as the one for the locket but Onodera nervously denied it and he just… well… accepted her denial. 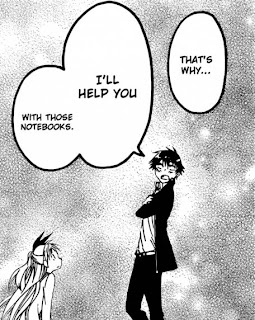 Chitoge should join the Neighbor’s Club
Not much of a surprise to Raku, Chitoge told him that she’s no good at making friends that’s why she’s making a notebook with their classmates’ names with descriptions. Certainly, for someone, it’s like a stalker diary but when Raku saw what Chitoge’s doing, he even told her that he was doing the same thing way back then and he even offered her his help so that she can make friends, as in friends whom she can really talk to about things.

Onodera’s eavesdropping…
I don’t know why she’s outside the classroom but it seems that Onodera was listening to Raku and Chitoge. Moreover, she heard Chitoge say that she’s just pretending. Somehow, she can’t helped but feel a little confuse on what she heard because she does know that Chitoge and Raku are on a relationship but what is up with “pretend”? Now things are certainly going fast and interesting. 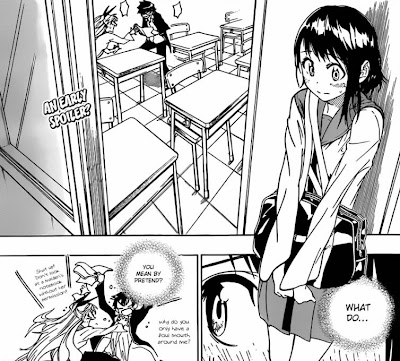