Ahhh… So we're back to the battle between Reversi and Zombie☆Gun. There's nothing really wrong with it but somehow it is exciting yet a little tiring already. The short arc about Hiramaru and Aoki seemed interesting and was relaxing which was probably the reason why it was brought up, to relax the reader from the intense battle between Ashirogi and Niizuma.

The Difference Between Reversi and Zombie☆Gun 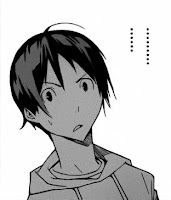 So the speculations are true, Zombie☆Gun is ahead of Reversi because of Niizuma's fans from Crow. It sure is true that there are people who never buys the magazine but buys the volume and this could be the number one reason why Ashirogi is still ahead of Niizuma in terms of the questionnaires. Chances are Niizuma can get ahead of Ashirogi one of these days.

I can't entirely judge either of them since I can't really read any one them. But through what they are saying, I'm more in favor of Reversi since, I think, it's a story-battle manga. But when Niizuma said, each individual chapters is a good read, I've been wondering but is he talking about Reversi here? I'm assuming that's the case. But somehow, I think that when you say that each individual chapter is good to read, it won't be good in volume. AND for some reasons, I'm starting to get confuse here. But Mashiro's explanation sure is more understandable, so I'll be going with that. I want to take my time understand what Niizuma is trying to say here and see the next chapter.

Reversi's getting a mascot character :3
When I saw the idea of mascot character, for Reversi, I think that it'll be weird but somehow if Ashirogi can just think of a pretty interesting mascot character it'll all work out. I sort of laugh when Takagi suggested a child-like animal or cute demon 'cause that's exactly NOT what I have in mind. I'm thinking of some mascot character like Ryuk, wouldn't that be great? 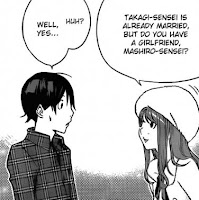 Who knew that Mashiro can be Popular with the girls?
It seriously never cross my mind for girls other than Miho to like Mashiro 'cause he doesn't really look like the type girls will fall over. But when I was watching the 2nd season of Bakuman, I just remembered there that Kato was actually thinking if Mashiro has a girlfriend, blah-blah, stuff like that which means that she could have actually like him. Moreover, this chapter introduced another girl that actually showed interest in Mashiro. Furthermore, it's another seiyuu and for some reasons, when she said "Azu-kyun" it makes me think that they actually know each other.

Pretty standard and good way to end an arc.
Nothing really new here, Mashiro and Niizuma just made those challenge accepted look at each other and said that they won't lose to each other in terms of questionnaires and sales. AND from there on, both Mashiro and Takagi seemed to have looked in deeper onto what Niizuma just said. And with that they looked fired up again. Looks like they're not entirely aiming of overtaking Zombie☆Gun's volume 1 sales 'cause they're pretty sure that they can't rather they're just aiming on lessening the gap between the sales which is really big. 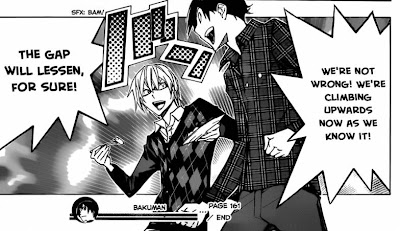