After the short two chapter-arc about Reversi’s weakness, I was sudden because of its early end but this chapter has certainly made up for it because this chapter main centers around one of my favorite mangaka in Bakuman and his oh-so scary editor.

I don’t really know what Ohba-sensei is trying to do here. Probably, catching some phase or whatever or probably something pretty good will come for this Ashirogi and Niizuma battle for 1st and 2nd place. Well through this ranking battle of Ashirogi and Niizuma, the editorial department is again talking about what will happen to new authors, blah-blah… But the highlight of this meeting, for me at least, is Yoshida-shi’s announcement of Hiramaru-san’s Bokutsu anime adaptation. Yay! But then, Aoki’s What God Gave Me is about to end which opened up for Hiramaru-san’s opportunity to talk to Aoki.

Calling on impulse is bad. Or is it?

Well, when Hiramaru-san suddenly called Aoki thinking about her series going to end soon, he took the opportunity to ask her on a date. More importantly it’s not just some regular tea party rather it’s a normal date on an amusement park. And the best part in here is that, Aoki didn’t even have second thoughts and immediately answered ‘Yes. I’d love to.’ :D

Other than sudden impulse, Hiramaru also had the sudden idea of proposing to Aoki. What could his proposal actually do to their relationship and his motivation as a mangaka? Who knows? Well, what we all know is that if he gets happy, the direction of his manga could suddenly change ‘cause I actually remember Yoshida-shi (was it?) saying that Hiramaru-san’s genius ideas actually comes from his negativity. LOL.

Somehow I find this chapter kind of cute not only because of the date but also because of Yoshida-shi actually thinking about making Hiramaru-san happy for real. We were shown in this chapter that Hiramaru-san actually decided to become a mangaka because he wants to be happy and Yoshida-shi was like: I guess you’ll be happy ‘cause you’ll be making money. So does money = happiness? Who knows?

I guess Yoshida-shi can be dramatic sometimes that he just suddenly had random thoughts of has he done enough for Hiramaru? Probably as an editor yes. But then, thinking about Hiramaru’s wish to become happy, he suddenly thought about taking responsibility for making Hiramaru happy.

And so, Yoshida-shi is doing his best to help Hiramaru-san make a successful proposal to Aoki-san to make him happy. For real.

I usually just see dates in amusement parks done by high school students in anime. Remember how old Hiramaru-san and Aoki-san are? Probably they’re in their late 20s but who cares? They still look cute! :D I like them better than the Mashiro x Miho pairing (no offense to fans!). Well in dates, I guess riding the Ferris wheel is no question. They say being on top of the Ferris wheel could be one of the most romantic alone places to be and probably a good timing to make a proposal but then, it looks like Hiramaru-san failed his proposal attempt ‘cause he’s totally getting nervous and all. More importantly, after getting off the Ferris wheel, he noticed that the ring is missing. Plus, Hiramaru-san suddenly grabing Aoki’s hand and making another round on the Ferris wheel without the proposal ring, what is he thinking? I sure can’t wait to find out. 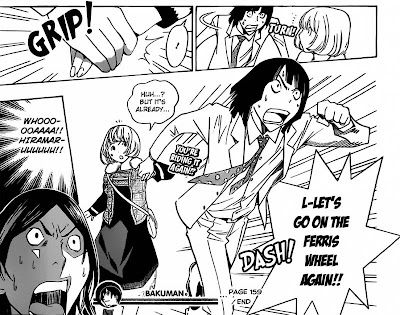